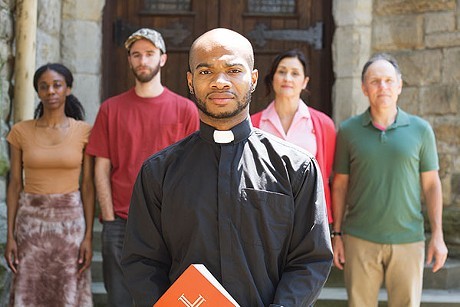 Hydraulic fracturing for oil and natural gas is practiced nationally, but Driftless is set mostly in Southwestern Pennsylvania, where drilling in the Marcellus Shale helped set off the fracking boom.

The two-act drama, which opened last night, uses fracking as a backdrop to the human story of one family –- though, much like horizontal drills break up rock for the gas inside, the reality of fracking keeps breaking through the narrative, imposing its own realities.

Collin Howard (played by Alec Silverblatt) is a young man who works in the gas industry, and the job interrupts his home life by frequently taking him on the road. His wife, Sierra (Siovhan Christensen), comes to believe that their well water is contaminated by nearby drilling operations, and might be implicated in a recent family tragedy. Her parents are played by Ken Bolden and Tammy Tsai, double-cast as a sort of saints’ chorus of St. Peter and St. Barbara (the latter the patron saint of miners.)

The show’s two main sets are, literally, kitchens –- one in Collin and Sierra’s house, the other in the home of Peter’s father, in Minnesota. The latter setting is used to explore the little-discussed but highly destructive practice of mining for the sand used in fracking wells.

Like a recent novel set in Pennsylvania frack country, Jennifer Haigh’s excellent Heat & Light, Driftless gives voice to different perspectives on fracking, from its economic impacts to the environmental damage it causes; it also draws links between addiction in people and society’s addiction to fossil fuels.

That’s a lot for one play, but Driftless, directed by Adil Mansoor, is well-acted and memorably staged. (Though the volume on the sound design, which threatened to drown out the actors at some points, could use adjusting.)

Driftless has three more performances, at 8 p.m. tonight and tomorrow night and a Sunday matinee.
Tickets are $15-20 and are available here.

The lobby also showcases artwork on fracking. Especially powerful were a series of photos by Mandy L. Kendall that captured the way gas flares from drilling rigs bathe rural Pennsylvania in light at night, further industrializing the countryside.