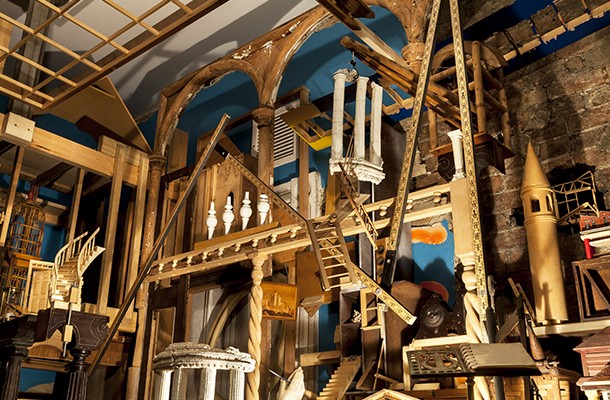 As City Paper glimpsed in a walk-through while the site-specific installation was in progress, Second Home packs the building with an array of architectural elements — from wooden archways to miniature curving staircases.

That was about two months ago, which suggests how extensive a process this is for Maher, an artist, architect and educator whose recent projects “have focused on processes of disassembly and reconstitution through drawing, photography, collage and constructions,” according to press materials.

Maher is a professor in the Department of Architecture at Buffalo-SUNY whose works have been exhibited across the U.S. and as far afield as Spain. His award-winning work has been featured in publications from the The New York Times to Architectural Review.

Second Home will be on view “for an undetermined amount of time.”

An opening reception is 6-8 p.m. tomorrow, in the museum’s lobby at 500 Sampsonia Way, on the North Side. Guided tours of Second Home will be given throughout the evening.