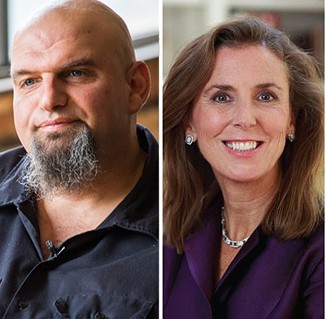 “I am grateful and honored to offer a full-throated endorsement for Katie and her candidacy. ... It’s that important that we elect Katie, she is a real champion for Pennsylvania’s working families,” Fetterman said during a joint-conference call with McGinty and reporters.

Fetterman's endorsement is a departure from his time competing against McGinty during the primary campaign,  where he called her out on many issues, most notably her support of fracking. Fetterman told Pittsburgh City Paper in February that McGinty has positioned herself as a “green fracker” and described that position as a “paradox.” (McGinty served as the state’s secretary of the Department of Environmental Protection for five years in the mid-2000s.)

During the call, Fetterman acknowledged their past rift and defended his endorsement saying “Katie and I agree on 95 out of 100 issues.”

Fetterman's endorsement shouldn't come as much surprise, however. Though he was one of the first primary election candidates in the country to endorse former Democratic presidential candidate Bernie Sanders, when Democratic presidential nominee Hillary Clinton secured the nomination, Fetterman threw his support towards her. He said Donald Trump was too dangerous a candidate to become president.

“John has been a vigorous and effective fighter for hard working people,” said McGinty. “This effort that he is joining me on today, to call attention and continue to defend consumers and Main Street against Wall Street, is exceptionally important. Millions of American families continue to struggle, not having regained their footing after the devastating losses of the great recession.”

Both McGinty and Fetterman were critical of Toomey and his ties to Wall Street. Toomey was an investment banker before entering politics in the late ‘90s. McGinty said his opposition to the financial regulations of the Dodd-Frank Act and the formation of the Consumer Financial Protection Bureau is an example of how Toomey is putting Wall Street ahead of Main Street.

Ted Kwong, communications director for Toomey’s campaign rejected this assertion and wrote to CP that Toomey has also been critical of Wall Street when he opposed government bailouts of financial institutions.

But McGinty said she wants to go beyond that. She said she would further strengthen Dodd-Frank, ensure banks can’t invest in risky hedge funds and further boost the Consumer Financial Protection Bureau, which was created by U.S. Sen. Elizabeth Warren, of Massachusetts, in 2011.

When asked how she would appeal to voters in small industrial towns in Southwestern Pennsylvania that may be wooed by Donald Trump’s claims that the steel industry will return, McGinty said there is an incredible opportunity to return jobs to these areas. McGinty said thousands of roads and bridges need to be repaired and vowed that manufacturing can compete here in the region.

And Fetterman’s support could help bring a tide of Southwestern Pennsylvania voters to McGinty, who was born and raised in Philadelphia and lives nearby today. Fetterman won Allegheny County in the Pa. primary, amassing around 93,000 votes, and also did well in other nearby counties.

But whether Fetterman's supporters will embrace McGinty isn't guaranteed. When Sanders threw his support and endorsement towards Clinton in the runup to the Democratic National Convention in Philadelphia last month, many of his supporters dissented. Inside the Wells Fargo Arena, they booed, held up protest signs, and even staged a walkout during Clinton’s official nomination. (They returned less than two hours later to watch the rest of the speeches, FYI.)

Still, in circumstances like these data shows voters can be swayed by endorsements. According to FiveThirtyEight.com, before the DNC many Sanders supporters said they wouldn't vote for Clinton. But Sanders' endorsement did help persuade some of them to change their mind, even if a third say they are undecided or voting for a third-party candidate.

A Q&A with Jeffrey Toobin, author of a new book about Patty Hearst