A Q&A with Jeffrey Toobin, author of a new book about Patty Hearst | Blogh

A Q&A with Jeffrey Toobin, author of a new book about Patty Hearst

The story of Patty Hearst's kidnapping has a bizarre staying power. It's been 43 years since the 19-year-old publishing heiress was kidnapped by the Symbionese Liberation Army, and arrested nearly two years later as their accomplice. Maybe it's the scale of her family's wealth, or the sticky psychological implications of Stockholm syndrome, or maybe it's that infamous bank-robbery photo, but this story continues to fascinate, confound and connect with people even today.

Count among them Jeffrey Toobin, staff writer at the New Yorker and legal analyst for CNN. His new book Heiress: The Wild Saga of the Kidnapping, Crimes and Trial of Patty Hearst (Doubleday)  chronicles the kidnapping in the context of a very troubled decade in a very troubled state.

You were a teenager when the story of Patty Hearst’s kidnapping broke. Do you remember your response to the story at the time?

To be honest, I have very little first-hand memory. I was aware of it in the way that a 13-year-old is aware of big issues in the news. I was kind of a Watergate junkie as a kid, so I knew more about Watergate than I did about the Hearst case.

That’s funny, I was just talking to a coworker who grew up in San Francisco and had hoped as a kid to be the one to find Hearst.

Speaking of that time period, the immediate aftermath of her kidnapping I feel gets lost in the madness and oddity of the whole story. We don’t hear much about the very beginning of the story. Can you talk about those first few weeks after her kidnapping?

Well, I think it’s important to say that this was a horrible and terrible experience, to be kidnapped. I don’t think we should minimize the horror of what she went through. To be thrown in a car trunk by people she knew to be murderers, who had killed Marcus Foster, the Oakland school superintendent, and bragged about it, was terrifying. But in the bizarre way of how this story unfolded, things changed over time.

When did you become interested in writing about this story?

It was really only a couple of years ago. I had not really thought about it. But then I wrote a story for the New Yorker about a gang that took over a jail in Baltimore. I got interested in the history of the gang, which is called the Black Guerrilla Family. It was founded by George Jackson, the famous prisoner in Soledad prison. I discovered that the prisons in the ‘70s, especially in California, were sort of hotbeds of political activity, and it turned out that the Symbionese Liberation Army came out of the same world. And that’s what lead me back to the Patty Hearst story, through the New Yorker story I wrote. 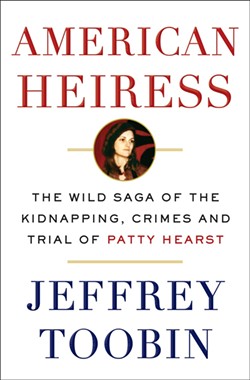 You’ve also written in depth about the O.J Simpson case with The Run Of His Life: The People v. O.J. Simpson (which was adapted for television on FX). Both stories feel emblematic of their decade. Hearst’s in the context of Watergate, Vietnam, domestic terrorism, classism in the 1970s and Simpson’s in celebrity, television, race, and voyeurism in the '90s. Did you run into other parallels between the two stories?

What was particularly striking to me was just how violent and dangerous things were in the '70s. The unbelievable amount of crime, political crime, a thousand bombings a year — just think about that idea of a thousand political bombings a year — which was going on in the '70s. The nature of criminal spectacle certainly was a parallel between Patty Hearst and O.J. But the magnitude of public attention was certainly greater in the '90s because there were just so many media outlets at the time.

What would you say is the biggest misconception about Patty Hearst in the general public?

Well, that Patty Hearst was coerced to commit one bank robbery, when in fact she committed an extraordinary number of crimes over the course of nearly a year and half. Three bank robberies, including one where a woman died, shooting up a street in Los Angeles, setting off bombs in Northern California. This was not a single act she was coerced to commit — this was a crime wave she was an intimate part of.

I imagine it’s because of that iconic photograph of her at the bank.

The photo obviously is the defining image of the experience, but also I think she did a pretty good job of convincing people that this was sort of a one-off thing.

Why do you think this story resonates so well with the general public?

Because it’s a mystery. I think people identify with the mystery. The question of whether a kidnap victim can turn into a fellow criminal with her kidnappers is a very compelling question and I think people remain fascinated by it, and often react very differently.

My purpose in telling the story is not so much to advocate for one view of her or another, but to lay out the full story in all its strangeness and that, to me, is more interesting than the psychobabble you often hear about the case, about brainwashing, about Stockholm syndrome, terms that are more journalistic than medical.

What’s life for Patty Hearst been like since this story took place?