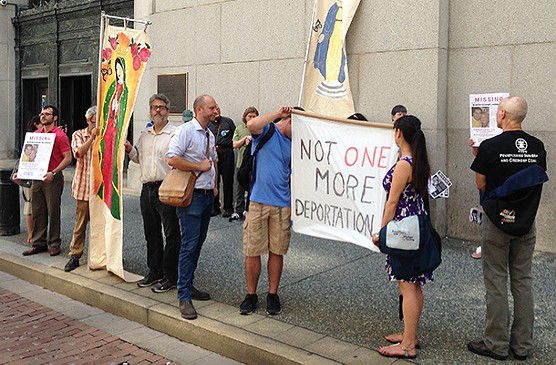 Labor activists, religious leaders and community advocates has since coalesced around Esquivel-Hernandez's cause, marching in rallies during the People's Convention in July and forming a website to keep Esquivel-Hernandez in the country. Pittsburgh Mayor Bill Peduto has also played a part by brokering meetings that helped Esquivel-Hernandez find a local immigration attorney, Jennifer Williams, who will consult on his criminal case and represent him during his immigration hearing.

And on Fri., Aug. 5, a group of 15 supporters held a vigil on the doorsteps of the U.S. Federal Courthouse on Grant Street, Downtown. The courthouse houses the offices of Western Pennsylvania U.S. District Attorney David Hickton, who is prosecuting Esquivel-Hernandez for felony re-entry.

"We are out here to reunite the Esquivel-Hernandez family," Guillermo Perez, of the Pittsburgh chapter of the Labor Council for Latin American Advancement, told the crowd. "Martin has committed no crime, unless you think wanting a life free of violence is a crime."

Pastor Linda Theophilus, of the Emmanuel Lutheran Church of Eastmont in Penn Hills, led the prayer vigil, calling out Hickton and praying he drops the charges against Esquivel-Hernandez.

"We are praying for David Hickton and that he decides this is not the right thing to do," said Theophilus, during the vigil. "We pray for Martin to be reunited with his wife and family."

Vigil-goers passed out fliers telling Esquivel-Hernandez's story, and held banners of the Virgin Mary of Guadalupe and a sign reading "Not One More Deportation." One banner was the same sign that Esquivel-Hernandez held up with his daughters during a May 1 rally, the day before he was picked up by federal immigration officials.

One passerby picked up a flier and then raised his right fist in the air, calling out in Spanish, "Justicia para Martin!" (Justice for Martin!)

By holding a prayer vigil, Perez hopes to defend Esquivel-Hernandez in a religious context. Perez says the Esquivel-Hernandez family is "deeply religious," and he is hoping to appeal to Hickton and U.S. Sen. Bob Casey in this manner, since both are confirmed Catholics.

The advocates supporting Esquivel-Hernandez said they plan to meet every Friday in front of the federal courthouse. "We will be here for as long as it takes," says Perez.

Pittsburgh celebrates the return of the EQT Three Rivers Regatta