VIA Festival announces its 2016 lineup | Blogh

Rakim
Seven years in, it's almost difficult to remember a time before VIA, which has since then created an increasingly challenging and diverse space in which to explore the intersection of new music, art and technology. This year's festival — happening Oct. 6-9 — offers one of its coolest lineups yet.

Headliners include influential post-punk group ESG, playing its first-ever show in Pittsburgh — and for that matter, Pennsylvania; legendary MC Rakim, who will perform Paid In Full in its entirety; and "legend-to-be" Juliana Huxtable, a poet/artist/model/DJ and prominent member of the New York City's LGBT community. "After her performance at [Carnegie Museum of Art] last year, we know her Shock Value party is guaranteed bananas," organizers Lauren Goshinski and Quinn Leonowicz wrote in an email to CP.

Other performers include, among others, Empress Of, Junglepussy, Rabit, Aye Nako, Fee Lion, Ghost Cop, Lee Bannon, and Ben UFO. "He's only in his 20s, but we've been trying to get Ben UFO to play here for the last 40 years," joke the organizers, adding that UFO is "one of the most versatile DJs out there." Locally-based performances and artists, visual programming and other events will be announced later, but "[a]s always, our visual programming is stacked — we'll have a Virtual Reality salon and so much more." 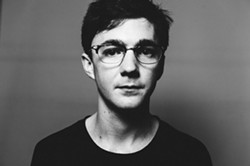 Ben UFO
This year, Ace Hotel will act as the flagship venue for the event, which is scheduled for Oct. 6-9. In addition to festival passes, Ace VIP passes are also available and include a two- or three-night stay in the hotel, all-access festival passes, and a few other perks. "We always like to experiment with the structure and locations of the fest. Since The Real World Pittsburgh never happened, we're taking a stab at it," writes Goshinski and Leonowicz. "Ace Hotel is giving us the keys to the castle, so VIP pass-holders and artists can eat, sleep and breathe the fest with each other under one roof." Both Ace VIP and regular passes are available for purchase now. If you don't want a pass, individual event prices range from free to $25.