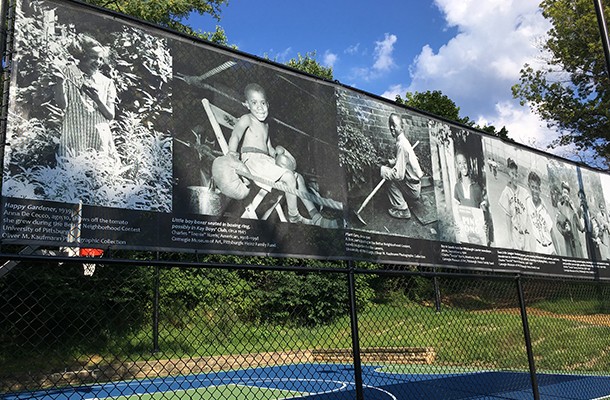 Photo courtesy of Scott Roller/Pittsburgh Parks Conservancy
Teenie Harris photos displayed along the fence by the park's half basketball court
Among Pittsburgh's neighborhood parks, there won't be one with a better view (to name just one amenity) than the brand-new August Wilson Park. The extensively renovated former Cliffside Park, with its spectacular view of the Allegheny River and the North Side, opens with a community celebration this Saturday. 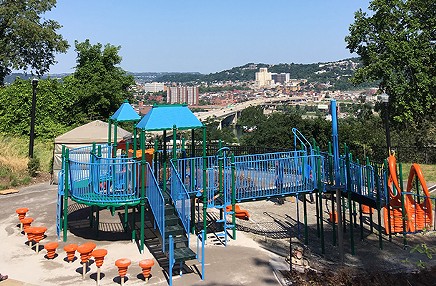 Photo courtesy of Scott Roller/Pittsburgh Parks Conservancy
The view north from August Wilson Park (North Side visible in the background)
The park is named, of course, for Wilson, the two-time Pulitzer-winning playwright who grew up literally right around the corner. And in fact, that building on Bedford Street, now known as the August Wilson house is itself under renovation, and for the month is the venue for a production of Wilson's Seven Guitars.

The new park, which is fully compliant with the Americans with Disabilities Act, includes a multi-age playground, a half basketball court, a performance space and more.

Special features include installations honoring the work of Wilson himself and banners with photos by famed Pittsburgh-based photographer Charles "Teenie" Harris. (Featured quotes from Wilson's plays include this one, from Ma Rainey's Black Bottom: "You don't sing to feel better. You sing 'cause that's a way of understanding life.") 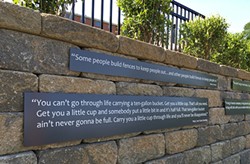 Saturday's events run from 2-4 p.m. and include a ribbon-cutting, "a festive all-ages procession along the park's winding entry path," music, activities for kids, and treats from Hill District food vendors.

August Wilson Park is located at 1801 Cliff St., a block off Bedford.