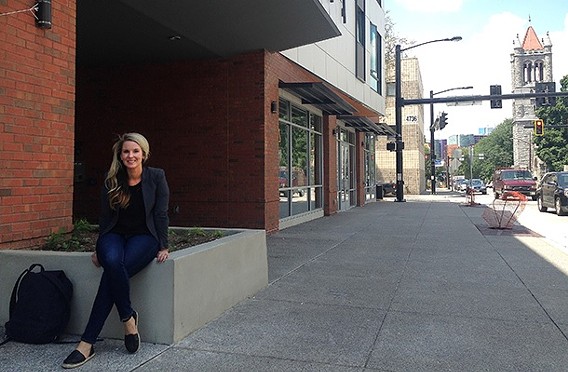 Photo by Ryan Deto
Rachel Reilly Carroll outside the Penn-Mathilda apartments, a new affordable-housing complex.
Rachel Reilly Carroll’s first trip to Pittsburgh wasn’t filled with trips up and down the Duquesne Incline or taking in a Steelers game at Heinz Field. Her tour of the Steel City instead took her by some of the locales that highlight Pittsburgh’s affordable-house struggles. She visited the new affordable apartments for veterans on the Bloomfield-Garfield border. She even walked past the recently demolished Penn Plaza building in East Liberty; witnessing the cranes clear away space for the future Whole Foods Market, a development that was announced last week.

“It was deeply poetic watching the cranes among the ruins of the building,” said Carroll. “Penn Plaza is a vignette for what is happening in cities now, all across the country.”

It’s stories like Penn Plaza that drew Carroll to visit Pittsburgh, as part of the Millennial Trains Project, which sponsors young representatives, with contributions from national affordable-housing group Make Room, to visit American cities by train and discuss how issues like affordable housing, inequality and transit access are affecting communities.

“This is an opportunity for millennials to explore the country by train, and speak about the issues that people are interested in,” said Carroll.

And the issues that are important to Carroll are affordable housing and public transportation, which she says are inextricably linked. Carroll explains that when transit investment comes to a neighborhood, the nearby property values rise, thus pushing out the low-income residents that rely most heavily on public transportation. Pittsburghers see this happening in East Liberty near the busway stop, but Carroll says this is common in many American cities.

“In Albuquerque, they are building a new [Bus Rapid Transit] line, and the mayor there says that nearby values have already gone up by 12 percent,” said Carroll.

She is visiting Albuquerque as part of her train tour, as well as Chicago, Kansas City and Los Angeles, to meet with local leaders and discuss affordable-housing successes and failures.

Carroll is also an elected commissioner for southwest Washington, D.C., which is also experiencing affordable-housing problems. “My neighborhood in D.C. is changing quickly,” said Carroll. “Over the next few years, we will see $5 billion in private investment.” In response, Carroll advocated for a build-first policy that would make sure affordable housing is replaced before old units are demolished, allowing low-income residents to stay in the neighborhood. She said the Washington, D.C. housing authority and mayor recently OKed a build-first policy.

It’s these proactive policies that Carroll will be advocating for on her five-city tour. “Once those [property] values go up, it’s so difficult to put in affordable housing — it’s too expensive,” said Carroll. “We have to do it at the start. It has to be backed in.”

While she applauds some of the recent steps to address affordable housing in Pittsburgh, Carroll said that setting strict rules now will be important if and when Pittsburgh receives a population influx from bigger-city residents looking to Pittsburgh as a cheaper option.

Carroll said that although the affordable-housing crisis hasn’t quite grabbed the attention of national politicians, the goal of her trip is to “raise awareness by bringing the conversation of the rental-housing crisis to the national forefront.”

She also hopes to inspire communities to take on their affordable-housing problems themselves.
“The political will comes from the voters,” said Carroll. “Voters have to demand it. The priority has to come from the community.”

Pittsburghers may have a chance to do just that. A petition drive led by labor-coalition Pittsburgh United has garnered more than the 8,000 signatures necessary to place a ballot initiative to fund a $10 million affordable-housing trust fund this November. The initiative calls for a raise in the city’s realty-transfer tax. City officials are looking into alternate ways to raise money for the fund.