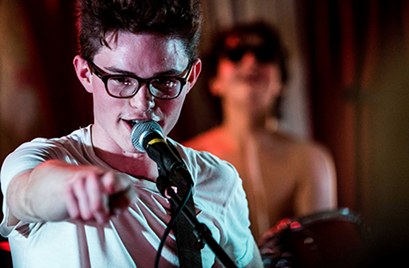 Photo by Luke Thor Travis
The Nox Boys perform in the upstairs ballroom of the James Street Gastropub as part of the Deutschtown Music Festival
James Street Gastropub & Speakeasy has hit a bit of a rough spot in recent days. The popular venue/restaurant has a long history of hosting live jazz, going back decades to when it was the James Street Tavern. The multi-floor venue hosts around 300 musical events a year, and it was a key venue for last weekend's Deutschtown Music Festival. But the show there, which featured a lineup of ten bands, was cut short by a noise complaint — odd, some attendees say, considering that there were no complaints about noise being generated at the main stage just a few blocks away.

Now, general manager Kevin Saftner writes in press release, extensive renovations need to be made to meet Pennsylvania Liquor Control Board noise requirements. "The law does not allow for the sound of amplified music to be heard beyond the licensed premises’ property line," he writes. "Step off the sidewalk, hear music, and we’re in violation. Penalties include stiff fines, suspension of the liquor license, business closure due to being a 'nuisance bar,' even jail time."

An IndieGoGo campaign has been launched, with a flexible goal of $5,000.

The LCB doesn't seek out establishments violating the noise ordinance but according to its statutes will investigate neighbors' complaints of "loud music or entertainment by amplification or noise from entertainment emanating from the establishment." Saftner tells CP that the LCB was "not wrong" in issuing the citation, but "it's just disappointing that it happened to us."

Shawn Kelly, a spokesperson for the Pennsylvania Liquor Control Board called CP Friday morning, to clarify that despite the statement from James Street, LCB did not cite the bar. Kelly said the noise statute is part of the state’s liquor laws and enforcing those laws falls to the Liquor Control Enforcement arm of the Pa. state police. The only action the LCB could take agaisnt any establishment would be not to renew the bar’s liquor license or to renew it with conditions. “I think a lot of people think we wnforce liquor laws, but it’s not us,” Kelly said.

As the fundraising webpage says, "With your help you will not only help us keep our 30 employees and their families fed, but you will help Pittsburgh musicians, artists & many others too. James Street is honored to host the Legendary Roger Humphries' weekly Jam Session. It would be terrible to have this tradition end because of the issues we are facing. We are also honored to work with young up and coming musicians such as the Bleil Brothers, Anton DeFade, George Heid III & countless others. Again, nothing would be worse than having these aspiring artists lose yet another venue to perform at. James Street is not merely a music venue though. We host Drag Brunch, Burlesque shows, Private events, Swing Dances, Church Groups & so much more. There would be nothing worse than closing our doors to all of these amazing people.

"...In order to #SaveJamesStreet we need to raise approximately $30,000. This money will go to sound proof the Ballroom as well as to install air conditioning and new electrical work. We are asking you who to help us with just a small percent of the total cost."

The venue also plans to host a series of fundraising concerts. Keep an eye on the James Street website and/or Facebook for further updates.