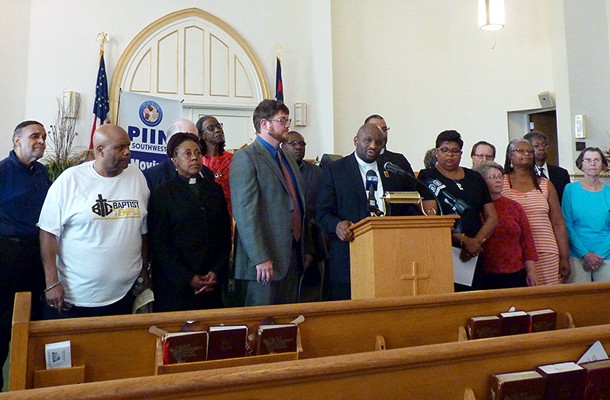 Photo by Ryan Deto
Rev. Rodney Lyde speaks at the Pittsburgh Interfaith Impact Network about race and police.
On June 12, a coalition of faith leaders convened to lament the recent shootings of two black men by police officers and the killings of the five police officers in Dallas, during a Black Lives Matters protest. The Rev. Rodney Lyde, president of Pennsylvania Interfaith Impact Network, says he is deeply saddened by all the killings, but is calling for a move that goes beyond protesting.

“This is a time for above and beyond,” said Lyde. “If our police are the best trained in the world, but we fail to deal with basic racism and the adversity of people of color ... our black people are arrested, locked up, and the worst possible outcome, killed.”

Alton Sterling, of Louisiana, was shot and killed by police officers after he was confronted for selling CDs on the street. Philandro Castile, of Minnesota, was shot by a police officer while alledgedly reaching for his wallet while being pulled over for a broken tail light. Pittsburgh activists marched through Downtown on June 9 to protest the killings.

Lyde said that police-community relations, or lack thereof, are not the sole cause of all the tensions and shootings of African Americans. PIIN has been involved in other social-justice fights in Pittsburgh, including faith leaders that were arrested outside of the UPMC Steel Tower after protesting the right for workers to form a union. He applauded the effort forged between PIIN and Pittsburgh Police to have officers trained in implicit bias but says that there is much more to accomplish to deal with the root causes of “structural racism.”

“That is where see the manifestation,” said Lyde. “In the lack of affordable housing, the disparity in education, and there are not enough family-sustaining jobs.”

Dave Swanson of PIIN and pastor of Pittsburgh Mennonite Church in Swissvale concurred with Lyde’s sentiments and said that perceptions need to be changed before positive progress occurs. “As long as black bodies and black lives are viewed as lesser, this will continue,” said Swanson.

The Rev. De Neice Welsh of PIIN announced that in response to the recent killings, PIIN will hold a community meeting on July 21, at 7 p.m., at the St. James AME Church in Larimer. Welsh said that topics will include economic inequality, loss of community resources, and self-hatred in minority communities.

“We see to convene this forum to seek justice,” said Welsh. “We believe faith should be at the center of the work going forward.”