An extended conversation with Gillian McCain, co-author of Please Kill Me: The Uncensored History of Punk | Blogh

An extended conversation with Gillian McCain, co-author of Please Kill Me: The Uncensored History of Punk

Legs McNeil and Gillian McCain provided the first detailed document of the New York punk scene with Please Kill Me: The Uncensored History of Punk. Beginning with the Velvet Underground, and continuing with the likes of Richard Hell (whose infamous t-shirt inspired the title) and the Ramones, it chronicles the story in unfiltered quotes from the musicians and friends who were there.

As the authors mark its 20th anniversary, with an edition that includes a new afterword, they will visit Pittsburgh for a reading at the Ace Hotel on Monday, July 18. City Paper spoke to McCain, before a reading in London two weeks ago.

How did the book come to life?
Legs [McNeil, co-author] had been doing a book with Dee Dee Ramone and had suggested to Dee Dee that they do it as an oral history because Legs was such a fan of the book Edie by Jean Stein and George Plimpton. So they started it. But Legs was also interviewing [music publicist/journalist/Ramones manager] Danny Fields and Richard Hell and kind of cut it together with Dee Dee. And Dee Dee was getting a little hard to work with. I was reading all these transcripts and I said, “This story is so much bigger than just the Ramones. You should do an oral history of punk.” He invited me to do it, and I knew if anyone else did it with him I’d be really jealous when I read the book.

Was anyone reticent about being interviewed?
[Long pause.] No. Because I think by the time period, there was just no interest in punk whatsoever. As Legs says, he thinks most people didn’t expect the book to get published! [Laughs] I think it was just a time period that people were ready to talk. It had been 15 years and maybe people were getting nostalgic for that time in New York. Because that was when New York really started to change, in the early ‘90s.

The books is really the first chronicle of that whole era, wasn’t it?
Our book is kind of a continuation of the book Edie, which is about the Warhol Factory. Edie [Sedgwick] is this socialite who becomes a superstar. But it branches out into all assets of the ’60s. Because ours starts at Warhol’s Factory and the Velvet Underground, I think our book is a continuation. And [it covers] the Stooges [who] started in the late '60s. Trans love commune, and MC5.

That early period seems like those might have been fun times but dangerous times too.
I really knew nothing about the MC5. We did those interviews near the end. So I got to be in co-interviews with them. And that was such a fascinating time, with the whole urban guerillas, White Panther party. There was so much humor to it. [Laughs] But that’s just looking back.

[Detroit activist] John Sinclair actually went to jail for cops finding some pot on him. For a few years! It was crazy.

But I liked all those people a lot: John Sinclair, [MC5 members] Wayne Kramer, Dennis Thompson. They were really fun. And great interviews!

We left Iggy [Pop] to the very last because we wanted to know what the book was [about]. We had ideas about where we wanted to put him in, so that made the questions more specific. We wanted to present to him, [by saying], We know your story. Legs started out, “Okay, you go to see the Doors at the Yost Field House. You’ve got a student ticket because of this. And you see them play, and Jim Morrison does that. Dot dot dot.” And Iggy’s like, “Woah! You’ve got a lot of detail there!” Well yeah, because we had done so many interviews with other people. So we could tell anecdotes that lead to questions that made his mind work in a different way. When people are celebrities they get their interviews down pat. I think we got a pretty original interview with Iggy. He definitely was not phoning it in.

Who stands out as the most memorable interview?
I really liked Wayne Kramer. He was really articulate and honest and forthcoming and funny. He was definitely one of my favorites. [Kramer speaks candidly in the book about his arrest for theft and drug dealing.]

Danny had been interviewed by Legs before I jumped on. But that’s kind of the reason I jumped on. I was getting up early to go to work and reading these transcripts of Danny. I said to Legs, “This is the funniest thing I’ve ever heard. This has got to be as big a part of the book as Dee Dee.”

I wasn’t in that interview but Danny would have been my favorite. And now we’re close friends. We’re in London together right now. We’re doing to read together at the Ace Hotel here in London on Friday. He’s my special guest. Unfortunately Legs isn’t here because he doesn’t fly.

We did a reading in Asbury Park. We did it kind of multi-media, because we produced and wrote, with Michael Des Barres, a radio show that’s been playing all over.

If you go on the Please Kill Me website there’s a list of stations that it’s played on. We used the real voices from the interviews. We’re starting in New York, we’re going to mix some of the voices with our reading. We’re also going to have a slide show with photographs.

I guess it could be kind of emotional too.
We always pick the funny parts. That’s the audience pleaser. We certainly wouldn’t pick the Jerry Nolan chapter [which chronicles the death of the New York Dolls drummer]. 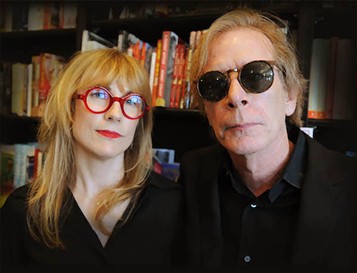 Photo courtesy of Grandstand Media
Gillian McCain and Legs McNeil
Nolan’s death ends the book on a note that doesn’t attempt to give things a romantic ending. Was that intentional?
I think it was just intuitive. We were wrapping everyone’s life up. I remember reading that Jerry Nolan interview in the Village Voice when it came out. It was done by Doug Simmons. I was incredibly moved by it. And I wasn’t a New York Dolls fan.

Legs got permission from Doug Simmons for us to use that interview. I think we were just wrapping up Johnny [Thunders, New York Dolls guitarist, who died under mysterious circumstances]. It seemed like Jerry was the natural person to go after that. We knew we had such an impactful ending with that. It’s almost like a vortex. You start with Lou Reed saying “Come over and let me talk to you,” and you end with a hole in someone’s shoe. [Nolan recounts an Elvis Presley concert, where the future king has a worn-out footwear.]

Did it take long to find a publisher?
Well, again, punk wasn’t popular. And oral history was not popular. We had offers from three publishers. Grove gave us the best offer. And I don’t think Grove has expected it to do as well as it has. I could be wrong.

Do you feel like you set a standard for books like this?
There’s a really good article done by a guy for a Santa Cruz newspaper [Good Times]. It’s interesting about how he said we kind of revolutionized the publishing world. There’s oral histories of everything now. So I’m very proud of that. The new 20th anniversary edition, Legs and I wrote an essay about technique and how we do oral history.

You were around during the punk era, right?
I wasn’t. I was born in ’66. That had been my fantasy that I was there. Doing the book was kind of living it out. The way they worded [my bio on the book], they made it sound like I was there [during the ‘70s].

How do you think of music today compares to that era? Do you keep up with new bands?
No. I just listen to the old stuff. I mean, I’m open to [new music] but I don’t read music magazines or listen to the radio anymore. I’m really out of it.

What does that music have that today’s doesn’t have?
I don’t know. Maybe I heard it when I was at the right age. I went to see at the Saatchi Gallery [in London] to see the exhibition about the Rolling Stones. Oh my god! They were the best band ever. How can you beat them?

A conversation with Shakey Graves