For the past 20 years, Pokemon fanatics have clutched their Gameboys and Nintendo DS's and hoped that one day they, too, might be able to set off on a journey across their region to capture the wild and mysterious creatures known as Pokemon. No more will we throw plastic Pokeballs at plush toys or pit our pets against one another to try make our world more like the Pokemon world. Now, our adventure has begun.

On Wednesday, Niantic released Pokemon Go, the much anticipated mobile title from a franchise whose previous iterations have all been on Nintendo platforms. For the uninitiated, Pokemon is a video-game series, originally developed by Game Freak for the original Nintendo Game Boy in 1995. Niantic
A Psyduck found near Three Rivers Heritage Trail in the Strip District. The game crashed as soon as this Pokemon entered a Pokeball.

On Wednesday, headlines continually popped up on social media saying that the game had been released in this or that region, but not quite yet in the States. And some folks were able to work around region-locked downloads and get the game a few hours earlier than their nation’s intended release.


But around 10 p.m. Wednesday night, I saw a headline finally announcing Pokemon Go’s U.S. release on Android and iOS, and within 10 minutes I was selecting my Pokemon trainer’s gender-starter Pokemon. The game uses your phone’s GPS to place your trainer on a map and indicate where nearby Gyms, Pokestops and Pokemon are located.


When you encounter a Pokemon, your camera activates for an augmented-reality battle sequence. You look around with your phone until the Pokemon comes on screen, and then you swipe a Pokeball toward it and pray that you catch it — a Pokemon tradition.


The first night, I picked Squirtle, a water-type Pokemon from the Generation I, as my starter. As I sat in my room,  my phone's screen showed the Squirtle sitting on my knee. I tossed a Pokeball at it and with Squirtle inside, the ball wobbled back and forth — the camera zooming in on my knee in suspense. The Pokeball stopped.


This is the closest I’ve been to catching a Pokemon in real life, and it all happened from the comfort of my bed.


But the real beauty of Pokemon Go is the prospect of adventure. Had it not rained that night, I would have been out in the streets, visiting PokeStops and catching more Pokemon.

Yesterday morning, I seized the opportunity to check out Pokestops on my commute. I stopped by the Hollow Men sculptures on the North Shore side of Three Rivers Heritage Trail and received three Pokeballs. PokeStops are attached to landmarks, like churches and monuments, and reward the trainer with items for visiting them.

Luckily, Pittsburgh is chock-full of these things. There’s at least one PokeStop nearly every block Downtown — often several.


For every one I’ve stopped at so far, I’ve received Pokeballs and, on occasion, an egg. The egg goes in an incubator and hatches a Pokemon — in the same fashion as the main series games — after you travel a certain distance. The greater the distance, the rarer the Pokemon.


Sitting at my desk, waiting for my phone to charge for this little adventure, I used the in-game incense item. It’s this game’s savior for those folks who are stuck in the office or just don’t feel like getting up.

After you use incense, Pokemon will come to your position for the next half hour. They’re single-use items, and you’re given only two to begin with. More can be purchased in-game, but currency comes from either going up in levels or from microtransactions.


After using incense, my desk was barraged by Zubats, giving me flashbacks to my first time entering Mount Moon in Pokemon Blue as an unaware 6-year-old. But as a seasoned 23-year-old, I knew what I must do. I took aim at the first Zubat I encountered, hurled a Pokeball, caught it, gaining its Pokedex entry and I went on my way.

Niantic
The first Zubat of many.

By the third Zubat that approached me, I wept virtual tears, begging the PokeGods for a Pokemon that’s a little less common, like that Clefairy that’s supposedly in my area, but has yet to appear ...


At noon, once my phone was charged, I hopped on my bike and rode toward Market Square from Centre City Tower (home to City Paper's offices). I found three PokeStops in the square: The Original Oyster House, Nicholas Coffee Co. and the "Work Accidents and the Law" plaque.


While at the plaque, I caught a psychic-type Pokemon, Drowzee. Surrounded by people during the lunch rush, in the heat of battle I waved my phone around to find the Drowzee. I aimed my camera at a nicely dressed fellow who stood next to the Pokemon, while I swiped Pokeballs in his and the Pokemon’s general direction — making both he and I a bit uncomfortable in the process. But, hey, “Gotta Catch 'em All,” right?


At that time, I noticed that cherry blossoms were falling from the plaque’s PokeStop indicator. I later found out that meant that Pokemon are attracted to that position for about a half hour. Which makes sense, because as I stood there I encountered a Rattata, a normal-type Pokemon, and another Zubat.


These cherry blossoms are caused by modules, an item that trainers can purchase in the in-game store and place on PokeStops.


Outside of PokeStops, once you reach level five, you’re able to participate in gym battles. I wasn’t able to reach level five by the time I finished writing this, because the servers kept crashing. But with the available number of Pokestops and Pokemon around the city, it shouldn’t take long for you to reach it.

At level five, you select a team to join, each bearing a color from the original Pokemon games. Those teams are Instinct (yellow), Mystic (blue) and Valor (red). Once a part of a team, the players are able to place Pokemon at unclaimed gyms or battle Pokemon at gyms claimed by opposing teams.


After exploring Downtown, I rode to the heart of the Strip District and found a PokeStop at St. Stanislaus Church. I walked toward the river to find another stop and I encountered Psyduck, a water Pokemon. I tossed a Pokeball at it and as soon as it entered the ball, the game crashed.

The two gripes I have with this game right now are the amount of server failures I encountered in the few hours I've played and how quickly it drains your battery. 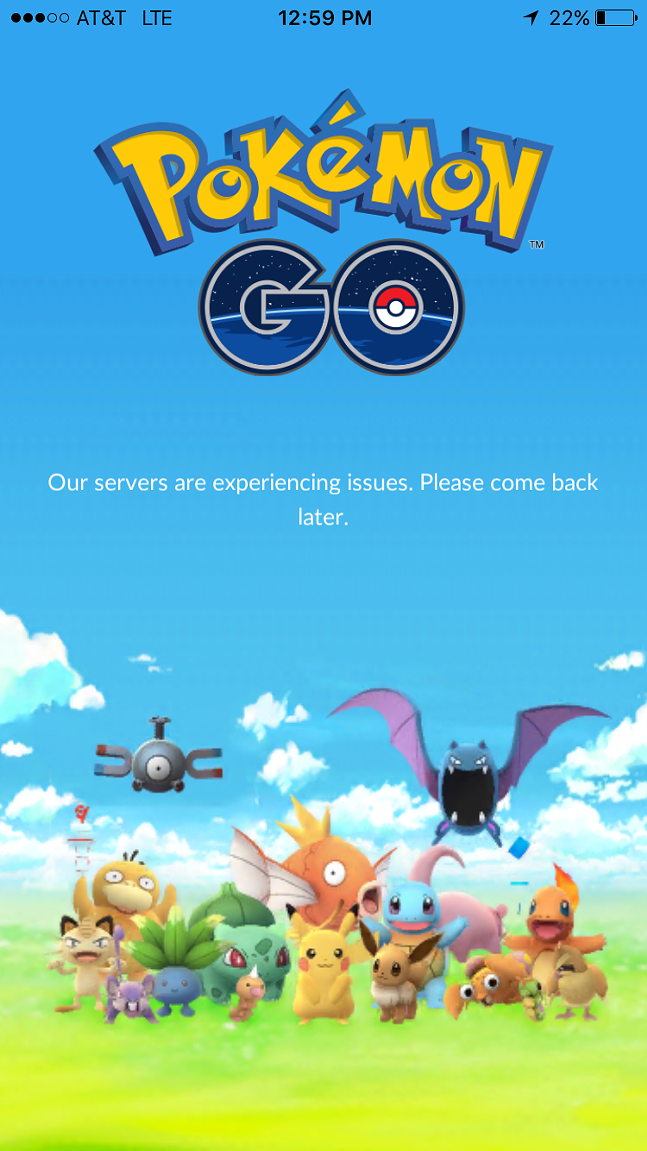 Niantic
A screen all too familiar to Pokemon Go players.
It's not surprising on either count. New games, as of late, are typically buggy at release — especially on home consoles. Plus, Pokemon Go is running both your phone's camera and GPS. Regardless, this game has a lot of potential for attracting tourism to Pittsburgh and other cities. Region-locked Pokemon could bring travelers to certain places to expand their collection.

Nintendo made a big move by putting Pokemon on hardware it hasn't produced. The series has been a staple first-party title and a hand-held game system seller since its conception. But the transition from Gameboy/Nintendo DS to Android and iOS could bring the series to a wider audience.

The Pokemon Go servers are still down as I write this, but if history holds true, the game should be running better in the coming weeks. I’ll endorse anything that makes me one step closer to becoming a real life Pokemon trainer.