This year marks the 25th anniversary of the Dave Matthews Band. Since forming in 1991, DMB has sold more than 30 million records worldwide, and they're the only group to have six consecutive studio albums debut at number one on the Billboard chart. 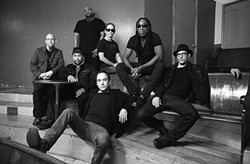 Courtesy RCA
Boyd Tinsley, second from right
Over the years, the band has become known for its annual summer tour where they visit dozens of cities across the United States. But this summer could be the last chance for fans to see DMB in concert for awhile since the group announced it would be taking next year off.

In advance of tomorrow's Pittsburgh show, City Paper interviewed violinist Boyd Tinsley by phone. For the past two decades, the 52-year-old musician's electric presence on stage has made him a fan favorite.

How do your concerts today compare to concerts two decades ago?
As a collective, we're expanding our whole musical realm and sort of reaching beyond. So some really cool stuff is happening on stage, all around, from all of the musicians, and it's really fun. It feels like the beginning years when everything was new because it is kind of a new time right now. It's a time when everyone is really digging deep. LeRoi Moore, the saxophone player who passed away [in 2008], he used to say every night, "Let's take it to the next level." And that sort of became our motto, something that was ingrained upon us. It doesn't matter what you did yesterday; it's all about what you do today. So we always strove to take it to the next level, and we're still doing that today.

You've been known to play new songs, that haven't been released, on tour. What do you like about playing new songs for the fans?
At some point we'll make another album, but these are just some of the songs we started writing and we thought we'd break some of them out on tour this summer. And we've really been having a good reaction from people. It's really fun to play a song live because they evolve and change. It's something new and something fresh. We just sort of play them, and they evolve and we find the songs.

How do you plan to spend your time off next summer?
After 25 years, we all kind of thought it was time to take a little time off, spend the summer at home. And also it gives people a chance to work on other projects. I've been working with a band called Crystal Garden. I put them together, produce them, and now they're starting to do some shows. Things are going really well for this band. They have great music, great charisma, and I'm having a blast working with them.

To what do you attribute the band's longevity?
We laugh a lot, joke a lot, stay positive. The whole organization, everybody's cool, everybody works together, everybody's very talented. So when you're in an atmosphere like that, you want to come back, you look forward to the summer tour.  And it's the music. We take the music to different places every night. Every night's an adventure. Some bands approach it differently: They play the song pretty much the same way every day. For us, we let the music carry us where it's going to take us, and that journey every night is really fun. I think it's what's kept us together this long.

We also have a dedicated fan base, and we've had a dedicated fan base from the very beginning. Some of them come up to me and say they've been to over 300 shows, which is just amazing. We owe so much to the fans and the fact that they show up is a big part of why we stick around.

Is there anything unique about Pittsburgh DMB fans?
I love Pittsburgh. The fans there are truly dedicated. I'm on Twitter a lot, and I get a lot of fans from Pittsburgh tweeting me all the time. I remember when I did a movie several years ago called Faces in the Mirror. We took it around the country to a few places, and we had screenings. One of the very first ones was in Pittsburgh. I went to the theater, and I had no idea how many people would show up. And I walked in, and it was packed. It was overwhelming honestly, and I'll never forget that. It was an incredible expression of love, and I appreciate that.