After City Paper reported the story of Martin Esquivel-Hernandez, an undocumented immigrant from Mexico with no criminal record who is currently in the process of being deported, CP editor Charlie Deitch called for Pittsburghers to get involved in the fight to keep Esquivel-Hernandez in the Steel City. 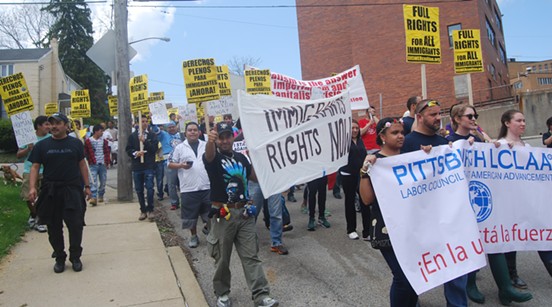 Photo by Ryan Deto
Martin Esquivel-Hernandez marching in a immigrants-rights rally on May 1
And many have responded. On July 8, more than 100 marchers will rally in support of Esquivel-Hernandez and “to oppose the politics of hate and fear,” according to the group’s Facebook page. The supporters are particularly calling out presumptive Republican presidential nominee Donald Trump and Republican U.S. Sen. Pat Toomey, from Pa., for their remarks and actions against undocumented immigrants. (Trump has called Mexican immigrants rapists, and Toomey sponsored a bill to block funding to “sanctuary cities,” or ones that refuse to communicate with the Department of Homeland Security about undocumented immigrants without warrants; the bill was blocked recently by U.S. Senate Democrats.)

In fact, Esquivel-Hernandez was picked up by immigration officers most likely because he had been cited for driving without a valid license in Mount Lebanon, a town without a sanctuary city-like policy. Lt. Duane Fisher, of the Mount Lebanon Police, says the township's general policy is to make contact with U.S. Immigration and Customs Enforcement if police “find someone who is unlicensed” and to see whether ICE has “any reason to see if [the suspect] is wanted.” Fisher says that from there, Mount Lebanon police don’t follow up on the case, and that it becomes ICE’s call. Pittsburgh, while not a sanctuary city, has a policy to not initiate contact with ICE, but will cooperate if contacted.

Immigration will be a main topic at the public march on Friday, which will coincide with the People’s Convention being held Downtown, and begins at 2:30 p.m. at 10th Street and Penn Avenue. For those wishing to provide further support to the Esquivel-Hernandez family, a website has been created (keeptheesquivelfamilytogether.com) where supporters can sign a letter to U.S. District Attorney David Hickton, who is prosecuting the case against Esquivel-Hernandez, that asks Hickton to drop the felony re-entry charges.

The groups rallying around Esquivel-Hernandez include the Pittsburgh chapter of the Labor Council for Latino Advancement, Latino outreach group Casa San José, nonprofit coalition One Pittsburgh, and social-justice-advocacy group the Thomas Merton Center.

A message in support of Esquivel-Hernandez is written on the website: “We sincerely believe Hickton is using this charge to brand Martín as a criminal deserving of jail time and immediate deportation. Martín does not belong in a prison cell. He should be back with his family and the community that loves and needs him the most.”

Esquivel-Hernandez has been in Pittsburgh for more than four years and has been involved in an assessment of Latino needs for Allegheny County; advocated for better translation services in Pittsburgh schools; and marched in immigrant-rights rallies.

The Obama administration has said that it will prosecute undocumented immigrants who threaten public safety, but the advocacy groups claim that Esquivel-Hernandez does not fit into that category given his lack of a criminal record and positive involvement in the community.

Donations can also be given on the website, or people can send a check to Pittsburgh LCLAA with “solidarity with Esquivel family” written on the memo line. Checks can be mailed to:

Review of Beckett one-acts at the New Hazlett Theater