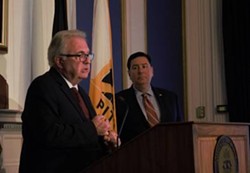 Photo by Billy Ludt
David Donahoe and Bill Peduto
Last year, after the Pittsburgh Water & Sewer Authority installed new and advanced water-metering infrastructure (AMI), they received so many complaints it was often too much for their 30-person call center to handle. (They have 250 employees total.) The complaints largely centered on thousands of delayed bills, and approximated water-usage bills, some of which were much higher than regular costs.

At a press conference last week, PWSA provided an update on efforts to address these concerns and replace incompatible AMI units in Pittsburgh homes. While the focus of the conference was on PWSA’s customer service issues, in light of growing concerns over water quality nationwide, they also provided information on lead levels in city water.

“The basic assumption with both was that we have problems,” said Mayor Bill Peduto. “They are a part of an aging infrastructure of an old steel town that is still here as we move into the 21st century."

Peduto said the authority has to put two actions into place to fix what they’re dealing with now and to further prevent issues: number one, make the branch’s operations transparent, and number two, approach future problems head on and with common sense.

At the press conference last week, David Donahoe, PWSA's interim director, told an anecdote about personally calling the water authority and spending five minutes on the line before speaking with anybody. But PWSA is seeing progress. Previously, 12 percent of PWSA callers hung up the phone before speaking with an operator. That number is now down to 2 percent, with waiting times around less than one minute.

“We are, obviously, a customer-based utility, and therefore being able to serve the customers and respond to them in a more timely basis is very important to us,” said Donahoe.

A task force has been assembled at PWSA to create an AMI plan, which Donahoe said should have been done prior to any installation. April, May and June of this year have been normal billing cycles for PWSA customers, as compared to last year, he said.

Outside of residential cases, around 1,000 meters in commercial settings will be replaced in total. So far, 400 have been replaced. Replacement requires shutting down all water in the business.

Donahue also explained that payment arrangements are being made for late bills exceeding a certain cost. A bill of up to $50 is a one-time payment; in the $50 to $200 range, payments are split between three months; bills of more than $200 are split into six payments.

On the subject of water quality, Peduto said water leaving the testing facility is lead free, so lead contamination occurs somewhere between facility and faucet.

The Environmental Protection Agency's action level for lead in water is 15 parts per billion.

“That should have raised a red flag,” said Peduto. “When you go from 6 to 14.8 on mandatory testing in a 12-year period and you know that 15 is the EPA guideline. We should have been having this press conference back then.”

The city offers free customer-requested lead-testing services. Participants are given a bottle that they fill and return to the PWSA, which is sent to an independent lab. The program has received 1,065 requests, and 454 completed tests have been returned.

Of those returned, 225 were non-detected for lead content. Donahoe said that the units tested were from random places throughout the city.

Correction: The story initially stated that PSWA's call center employed 250 people. While PWSA employs a total of 250, 30 employees work in the call center.