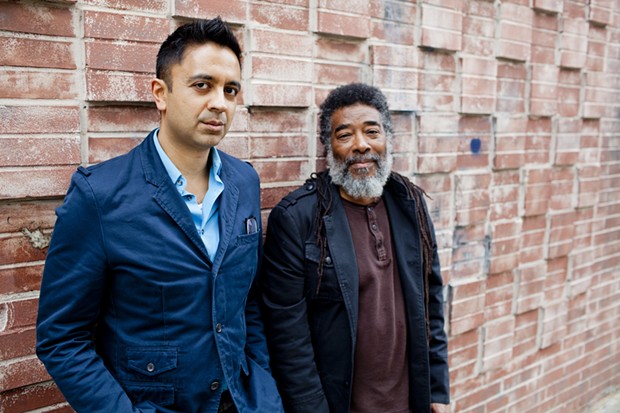 Courtesy of John Rogers and ECM Records
Vijay Iyer (left) and Wadada Leo Smith
While talking to trumpeter/composer Wadada Leo Smith about his upcoming performance at the Pittsburgh Jazz Live International Festival, it becomes clear that music means more to him than just a series of notes on a page or a spontaneous solo that reflects his mood at the moment. It incorporates a sense of history and the desire to “create discussions,” as he puts it. This is especially true with Ten Freedom Summers, the massive composition that fills a four-disc set. There were so many thoughts that Smith expressed and which didn’t make it into the feature in this week’s City Paper. So it felt appropriate to include a few more here.

When you’re writing music about national parks or the Great Lakes, how do you channel the subject matter into the music?
Well, essentially music is like air, you know? It pervades the whole space around earth. Air becomes certain kinds of air – condensed air, air conditioned, air pressure. It’s the naming that actually triggers the memory and identifies the object. Even more than that, inside of all of these works that I do, I look to embed some psychological element. Usually that [element] is gained through reflection and research. So I specifically finish my research and I reflect on a particular section. Just like any other kind of reflection or contemplation, ideas come to you. Those ideas are the gems of ideas made specifically of materials to that particular piece or that section of the work.

Do you leave room for improvisation or is the music fully composed?
All my work has some form of unknown property in them — places where each individual of the ensemble has the opportunity to play something there that makes it also unique. The unknown moment, which we call improvisation, is always available in my pieces.

My work always has these kinds of ideas about art being able to imply, implicate and condition change in our society. That change is a purely spiritual one that has to be actualized by individuals who will take the opportunity to understand themselves through art in order to have this chance to do it. Art is a less divisive practice than religion and, let’s say, work ethic and things like that. It allows you to find the better part of yourself and let that better part of yourself become a motivation to change our society to what we’d like it to be.

You keep going back over and over. I find out stuff about Billie Holiday in any of her pieces that I’ve re-listened to. Her music was so powerful and rich in poetic wordplay. You never really truly get a full understanding until you just get embedded over and over and over in it. Usually I get to the point where I get completely saturated and I pull back for maybe a month or two years or something. And then I start all over again! So it’s not about the type of music it is, it’s about the engagement of deeper insight into the art maker and the art that they make.

Ten Freedom Summers – after all that history occurred, had you always hoped to put together a large piece or did it come together at once?
In the beginning, I was born in Mississippi. Several of those artists [named in the sections of the piece] were within shouting distance of my community. Fannie Lou Hamer. Emmet Till was killed 13 miles from where I lived. He was 13 years old and I was 13 years old. Medgar Evers, who also lived in Mississippi, was also killed 48 miles from where I lived.

So I’ve always wondered if I would ever had the opportunity to participate in the Civil Rights movement the same way in which a guy like James Baldwin or a person like Bob Marley or Michael Jackson or Stevie Wonder – people like that or going way back to people like Billie Holiday. “Strange Fruit” [the song she sang about a lynching] is one of the most political pieces ever performed. I’ve always wondered as I was developing, “Would I ever be able to that, or would I do it?”

So, 40-some years ago, [violinist] Leroy Jenkins asked me to write a piece for his new ensemble, which had [pianist] Anthony Davis, [drummer] Andrew Cyrille and him. I wrote “Medgar Evers: A Love-Voice for Thousand Years’ Journey for Liberty and Justice.” That was the first piece written for that. Because I remember the day he was killed. I remember the news broadcast of it.

I did it and then 40 years later, the same piano player that played it with Leroy Jenkins – Anthony Davis – recorded it with me. So that work has been born over the years. And I realized after that, I could pursue this course of music not as a protest, but music as an active element in trying to motivate and create discussions about the role of life, liberty and freedom in our society. The goal of [Ten Freedom Summers] was to create a work that would show the impact of the Civil Rights movement on America and America’s reaction to that movement.

I’m still working my way through it.
That is why it’s so big – it should take at least 20 years to understand all of it.