Final week for “Venus in Fur” at Pittsburgh Public Theater


When I interviewed Whitney Maris Brown for a short preview of this production of David Ives’ play, she couldn’t say enough about the role she was to play: Vanda, an actress auditioning to be in a stage adaptation of a notorious 19th-century novel. 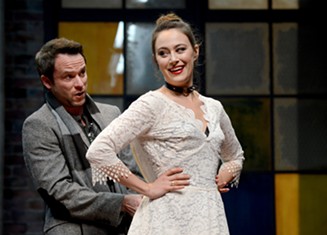 Photo courtesy of Pittsburgh Public Theater
Christian Conn and Whitney Maris Brown in "Venus in Fur"
Having seen this acclaimed comedic drama last night, I can’t say enough about the play, either. Seven performances of the Public's local-premiere production remain through Sunday, and I second Ted Hoover’s rave review for CP: Head Downtown for one of them. (If it’s any further recommendation, at last night’s performance I ran into another local theater person who said that this is the third production of this 2010 play he’s seen, in the third different city.)

Ives, primarily known for All in the Timing, outdoes himself with Venus. It’s just two characters, Vanda and Thomas, the playwright and director for whom she’s auditioning. Vanda at first seems ill-suited for the role: the domineering lover sought by the play’s protagonist, an aristocrat who wants to be subjugated by a woman. (Thomas' source material was Leopold von Sacher-Masoch’s 1870 novel Venus in Furs.)

But Vanda immediately begins proving herself to be much more than she seems, even as Venus in Fur expands into a slippery, endlessly engaging play-within-a-play, wherein the borders separating the two plays become increasingly indistinct. Partway through, Ives’ witty and incisive script takes an intriguing turn into a feminist critique of the play-within-in-a-play and its source material, even as the whole depicts a power struggle between director and actor.

The production is driven by terrific performances by Brown and by Christian Conn, as Thomas, directed by Jesse Berger. (Vanda really is a fantastic role, just as Brown indicated.) And then, in its final minutes, the play kicks imperceptibly but decisively into another gear entirely.

The Public’s O’Reilly Theater is located at 621 Penn Ave.