Affordable-housing issues could be put to the Pittsburgh voters this fall. Labor-advocacy group Pittsburgh United is leading the charge to gather 15,000 signatures that would place a referendum to city voters, asking for a 1 percent realty-transfer tax increase to create and fund the Housing Opportunity Fund. (This fund was originally referred to as an affordable-housing trust fund in the city’s Affordable Housing Task Force’s recommendations). 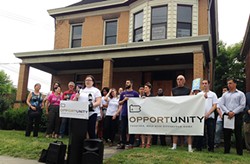 Photo by Ryan Deto
Jennifer Kennedy, of Pittsburgh United, announces goal of placing affordable-housing initiative on November ballot at a press conference in the North Side.
The goal is to raise at least $10 million per year to fund affordable-housing and rehabilitation projects throughout the city. Jennifer Kennedy, director of strategic campaigns for Pittsburgh United, says this is the first affordable-housing ballot initiative the city has ever seen. The flier for the ballot initiative says the fund will rehabilitate 270 homes for renters, create 234 new affordable homes, and provide rental assistance to 180 families each year.

“Development in Pittsburgh has benefited some, but it has also increased housing prices for many,” says Kennedy. “That is why we are starting a grassroots ballot initiative to create and fund this Housing Opportunity Fund.”

Local chapters of Service Employees International Union, Pittsburgh Interfaith Impact Network, the Sierra Club, Just Harvest and Action United are among the groups that support the ballot initiative. Kennedy says that over the last five years, an average of $9 million per year would have been created if a hypothetical 1 percent realty-transfer tax were applied. Last year, a 1 percent increase would have generated over $10 million.

During the press conference, Angel Gober, of the Brightwood Citizens Council, stood in front of two abandoned homes that were set for rehabilitation in the Marshall-Shadeland area of the North Side. She spoke to the success of a few recent home rehabs in the area but said it took a “very, very long time” to accomplish.

“We want to change this neighborhood and turn it around,” says Gober. “But it is hard to do when the pot of funds is limited.”

And the pot is not only limited, but it has been shrinking dramatically over the years. According to Mark Masterson of the North Side Community Development Fund, federal housing-support funding has shrunk from $25 million per year to $13 million. State funding has decreased from $7 million per year to virtually nothing. He applauds this effort to create a local source of funding for affordable housing issues.

Masterson also says that local funds have much more flexibility than federal or state funds. This effort adds to other goals to raise local funds for affordable housing, including a special fund for the East Liberty area. He says the Housing Opportunity Fund fund could create not only new affordable rental housing, but also could support a Community Land Trust (an affordable home-ownership device), and be used to help low-income residents with modest home changes that will keep them living in their city neighborhoods.

Kennedy says that, if passed, decisions on how to spend the fund would go through the two Affordable Housing Task Force boards, which are made up of elected officials, city staff, developers and community members. The funds would eventually make their way to local community-development corporations.

“The great thing about this is that it gives local groups the ability to fix things,” says Masterson.

Final week for “Venus in Fur” at Pittsburgh Public Theater