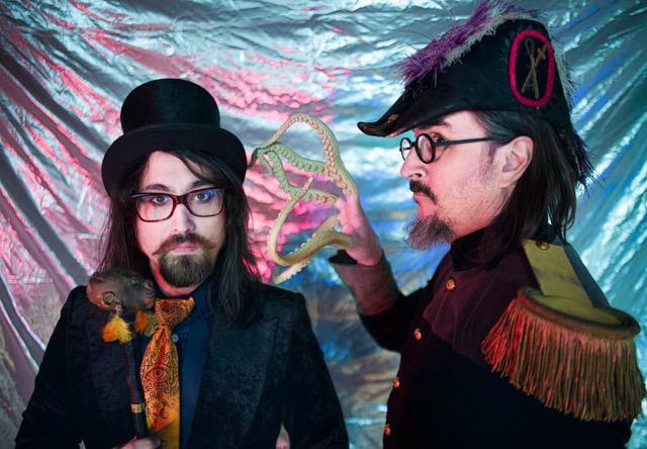 Photo courtesy of Charlotte Kemp Muhl
Sean Lennon and Les Claypool
Sonic psychonauts Sean Lennon and Les Claypool (both fearless — and frightfully gifted — explorers of the outer edges of any given musical terrain) have paired up to create the aptly-named Claypool Lennon Delirium, resulting in the recently-released, deliciously out-there debut LP, Monolith of Phobos.

Having just embarked on their first tour in support of the collaboration, the duo has been voyaging to venues across the land, and they’re bringing the Delirium to beyond-beautiful Nelson Ledges Quarry Park in Garrettsville, Ohio — just about a 90-minute drive from Pittsburgh — on Friday, June 17.

They’ll be joined there by rock monsters the Dean Ween Group, as well as musical genius, legendary funk pioneer and very-special guest Bernie Worrell (who, having been diagnosed with Stage 4 lung cancer, is reportedly planning on sitting in with the Claypool Lennon Delirium as long as his health permits him to do so).

It’s shaping up to be a once-in-a-lifetime kind of freakout, and, with other bands performing throughout the weekend, a marvel that’s most certainly worth making a trip to Ohio to experience.

I caught up with Lennon for a pleasant little chat over the phone prior to the Delirium’s recent performance at the Orange Peel in Asheville, N.C. Here’s some of what he had to say about the project, recording at Claypool’s Rancho Relaxo, Michael Jackson’s pet chimpanzee, and a couple of other things:

City Paper: First off, thanks for taking some time to talk with me — most appreciated, man. To start off, I guess, just sort of describe the vibe at Rancho Relaxo [Claypool’s California homebase] during the Delirium recording sessions and the rest of the time you spent there.

Sean Lennon: [Replete with Bob Ross-esque paintings, vintage wood paneling, and plenty of other physical manifestations of Claypool’s singular aesthetic],it kind of feels like you’re going into the indie-rock/alternative-rock equivalent of Charlie and the Chocolate Factory. ...He’s also very rural [tending a vineyard, driving around a tractor, picking mushrooms, and things of those sorts]. It’s cool as hell. [The space includes] a really beautiful studio. It was just the two of us … and we pretty much made 10 songs in two weeks. ...It was very inspired. Alotta fun.

CP: I caught some clips of the Delirium’s first couple of shows this month, and, on one, I heard Les introduce you as ‘an interesting fellow … a furry fellow … a wide-eyed, wondering fellow,’ or something along those lines. Now, how would you describe your good friend Mr. Claypool?

SL: [Laughs] He’s a little less pretty than me, but we’re definitely brothers from another planet. ...He reminds me of the captain of a ship. He’s a good leader. And he’s got prodigal skills.

CP: The tunes on Monolith of Phobos are playful, for sure, but you guys take us into some decidedly dark territories along the way. Was that [the album’s tones and themes] planned in advance, or just a natural outcome of the two of you teaming up?

SL: It was a little of both. We did a lot of talking before we started recording. ...We had a vague map, and in the end, started following our guts. I think we really get each other … [and] I think we shared the same feelings about direction without having to plan it too much.

CP: [Being that you are John Lennon and Yoko Ono’s son], some critics whose stuff I’ve come across seem to want to make a lot of basic, obvious comparisons between this work and anything and everything Beatles. How do you react to that?

CP: Now, I have to ask you about ‘Bubbles’ [a surreal ditty on Monolith, with an awesome accompanying video, about Michael Jackson’s pet chimp]. Judging from some angry, odd posts on various social media, it’s seemed to piss off a pretty good number of militant-type MJ fans. Any thoughts on that?

SL: I don’t really care. ...It’s a fun song, and a cool video. And I love Michael Jackson. I don’t write songs about people I don’t like.

CP: So how have the first few shows of the tour been for you guys?

SL: It’s all been pretty epic. This is definitely the most fun I’ve had on a tour.

CP: How do you feel about the prospect of getting to play alongside the legendary Bernie Worrell at the [upcoming] Nelson Ledges show?

SL: Bernie is any musician’s musical hero. He’s the greatest of all time. We’re all really sad he’s sick. The whole world is. If I ever had the chance to play with him, I could retire and be happy. ...I’m just a huge fan.

CP: Anything else you’d like to add while we’re still on the horn?

SL: All I can say is this project has really been a blessing, and it’s exciting, and it’s crazy it’s taken me 41 years before I’ve experienced this. I’m really excited about it. It was worth the wait.

Ryan Smith is a freelance writer and photographer focusing on arts, culture and other topics throughout the region.