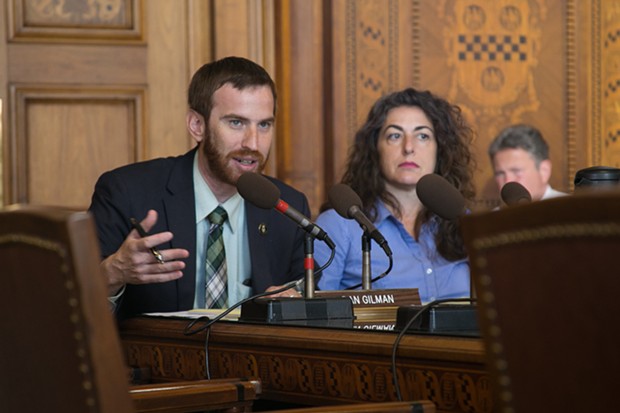 CP file photo by Mike Schwarz
Councilor Dan Gilman
This week, Pittsburgh gave preliminary approval to a measure that would protect victims of domestic violence and stalking from housing discrimination.

"What we have heard has happened in the past is basically a landlord would say I don't want trouble here because of a lot of police visits, because of a lot of loud noise, because of neighbor complaints about disturbances," said Councilor Dan Gilman who sponsored the legislation. "And victims end up losing their housing. This would guarantee their protection."

At the council meeting on Wednesday, Council President Bruce Kraus signed on as a co-sponsor of the bill. He also expressed a desire to change the verbiage of the legislation from domestic violence to intimate partner violence, a change Gilman noted might not be

"I always worry that we compartmentalize intimate partner violence as only happening in the home and we know that's simply not true," said Kraus. "We know it happens public spaces and work places all the time."

District 2 Councilor Theresa Kail-Smith  took the opportunity to raise concerns about whether victims of domestic violence are getting the help they need.

"Other residents are effected by this. They are effected by seeing things happen in the community," said Kail-Smith. "There has to be some response from the women's shelter and any organization that works with domestic violence or intimate partner violence. So it's not just continuous calls [to the police] and continuous calls and no one is getting any help."

Councilor Darlene Harris expressed concerns about the impact of domestic violence on neighbors.

"There's a lot of violence that can happen there if someone loses it and brings a gun in and starts shooting kids," said Harris. "There has to be some kind of attempt to stop the situation from happening because of the safety that others who may live in the building."