After drawing more than 500 visitors last year, the Performance Art Festival (PAF) is back, featuring performances by 22 artists from all over the globe, and now as part of the Dollar Bank Three Rivers Arts Festival. 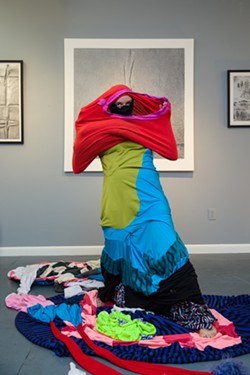 Photo courtesy of the artist
PAF performer Hannah Thompson, of Pittsburgh
Founded by Bunker Projects, a gallery and artist residency based in Friendship, the festival plans to showcase 16 combined hours of performance. Cutting-edge pieces will include public interventions as well as site-specific performances centering on themes that connect across cultural and political boundaries.

The performers in the third annual festival, curated by Abagail Beddall, hail from as far away as Norway, Italy, South Korea, Spain and Mexico, and from Washington D.C., Chicago, New York City and, of course, Pittsburgh.

Bunker Projects chose to expand the festival from its home base, which has a gallery area of about 500 square feet along with apartments and studios for resident artists.