Port Authority is finally moving into the 21st century. For years, countless cities across the country have used technology to provide riders with more up-to-the-minute information about buses, subways and rail cars, but PAT has lagged behind.

Now, the authority has regained financial footing and is looking to implement its new technological muscle in the form of digitally enhanced bus stops, which fits into its plans to modernize and expand Allegheny County’s public-transit system.

“We were behind the times, but now with this new technology, we are leap-frogging most major cities,” says PAT spokesperson Adam Brandolph. 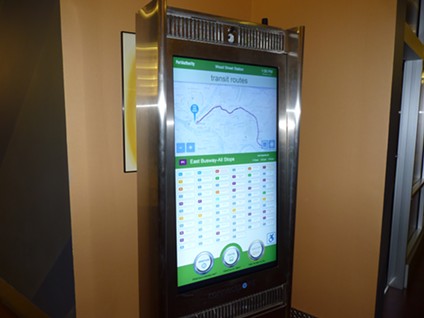 Photo by Ryan Deto
Digital information kiosk that will be installed at Downtown light-rail stations
PAT plans to build eight solar-powered bus stops that will provide digital readings of routes’ wait times on iPad-size screens, and two of those digital bus stops will also include maps. (Exclusive of PAT's plans, the super-stop at Smithfield Street and Sixth Avenue Downtown will also soon have a digital screen that shows up-to-the-minute wait times.)

The authority will also install five large touchscreen kiosks that will read out route overviews, provide up-to-the-minute wait times, and offer advice on trip planning (basically utilizing the interface that Google Maps uses). Users will be able to get directions for using public transit, walking, biking or driving, and will be able to email or text those directions.

The kiosks will be located at light-rail stations Downtown and on the North Side, and Brandolph says they should be installed by August. Pole bus stops are also getting revamped.

Many pole bus stops currently only list the route number and name on a small sign. Some of these signs also include routes that no longer exist or routes that have been altered so that bus no longer stops there.

PAT plans to build 85 low-tech pole bus stops Downtown that will include a small map with information on how often buses arrive, as well as routes printed in much larger font. Brandolph says these new pole stops will provide much of the information from the print bus schedules, but condensed into an easy-to-understand format.

“Downtown Pittsburgh has thousands of signs directed at motorists, but it’s equally important for pedestrians to know where they can hop on a bus or grab a light rail vehicle to get them to where they want to go,” said Allegheny County executive Rich Fitzgerald in a press release. “This new wayfinding will enhance visibility of our transit system and make riding on public transportation easier.”