While openness toward the LGBT community has improved in Allegheny County over the years, urban Pennsylvanians sometimes forget there are many other places throughout the state that don’t share Pittsburgh’s pride. (Only Erie and Allegheny counties provide legal protections for LGBT job- and home-seekers in Western Pennsylvania, after all.) 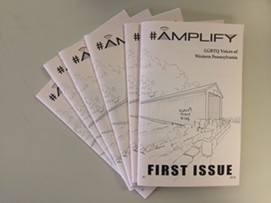 Photo by Ryan Deto
Copies of the AMPLIFY zine
To that end, advocate and blogger Sue Kerr has chosen to amplify unheard voices in hopes that those LGBT people living in less-friendly communities don’t feel marginalized. Started in 2015 as part of her artist-in-residency with Garfield’s Most Wanted Fine Art, AMPLIFY blog documents the experiences of LGBT people with ties to 18 Western Pennsylvania counties and has already told the stories of about 150 individuals.

Now Kerr is hoping to spread awareness of her project with a print zine that has been distributed regionally . “The zine was part of the plan all along,” says Kerr. “We wanted to provide something tangible. Then when people have safe access to the internet, they can explore [the blog] further.”

The first issue of AMPLIFY includes 11 stories, taken from her blog, that cover a wide range of different LGBT experiences. Kerr plans to print four issues a year and hopes to focus on certain groups, like pansexuals or bisexuals, in upcoming editions. She also hopes to eventually distribute the zine to all 26 Western Pennsylvania counties.

So far, the project has proved popular. According to Kerr, the first 500 copies of the zine were distributed in 12 days, and the Pittsburgh Youth Pride Prom has requested an additional 350 copies. A grant from the Pittsburgh Foundation helped Kerr expand her AMPLIFY project, but she says that additionally funding must be sought to print more copies of the zine. (Those interesting in donating can visit the crowdfunding page here.)

Kerr says that some LGBT residents in rural counties are a bit more hesitant of online technology, and so she hopes the zine will provide another avenue for those in the community to tell their stories.

“There is a thirst for print,” says Kerr. “Many people would rather fill out [their story forms] on paper.”