One year ago this week, Pittsburgh launched its first-ever bike-share system with 12 stations. Now the system, known as Healthy Ride, has 50 stations dotted across Pittsburgh and is looking to add more.

As part of this year’s first Open Streets festival, Healthy Ride director David White announced plans for Pittsburgh Bike Share to add more stations and reach outlying communities. An interactive map shows around 90 suggested locations, many in neighborhoods that do not currently have a bike-share station, such as Squirrel Hill, Homewood, Beechview and West End Village. The bike-share
click to enlarge 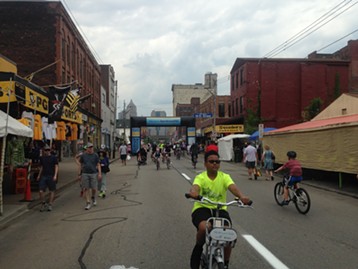 Photo by Ryan Deto
Patron riding a Healthy Ride bike as part of Open Streets festival
system is also considering expanding outside of the city limits and has suggestions for stations in Millvale, Wilkinsburg, West Homestead and Bellevue.

“I certainly would not rule out creating connections in Millvale or Wilkinsburg,” says Healthy Ride spokesperson Erin Potts. “These are both areas we'd love to serve.”

Healthy Ride is seeking public input on where the next stations could go. Those interested can visit the map at healthyride.com, “like” spots and provide comments on suggested stations.

“There are, of course, areas where we see great connection potential, but we want to start with hearing from our riders and people who want to ride,” said Potts in an email to City Paper. “We view the interactive map and public-outreach strategy as a means of getting invaluable feedback from the people who live, work and play in Pittsburgh. Their insight will help inform the next 10 stations and beyond.”

Healthy Rides’ first year in operation has netted 80,000 rides, 30,000 registered users, and 2,250 monthly members, according to a press release. On Bike-to-Work Day, when Healthy Ride offered free rides all day, the bike-share system saw 575 rides, including more than 100 during commuting hours.

“We hope that by growing our system we will see even more people biking in Pittsburgh,” said White in a press release.