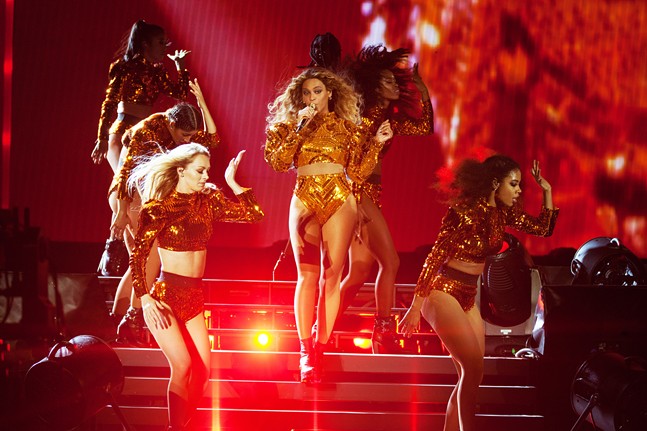 Photo courtesy of Daniela Vesco/Parkwood Entertainment
Beyonce performs during the Formation World Tour at Heinz Field on Tue., May 31
The buzz of excitement in the air was tangible as swarms of Beyoncé fans, lovingly named the Beyhive, descended upon Heinz Field. Her powerful presence had attendees dressed up and ready to slay, and they came ready to give it all for Bey. A young lady screamed, “I’d die for Beyoncé!” as she trucked it across a busy Reedsdale St. in an attempt to reach the field seating gate. Same, girl.

Before the main event came producer and DJ Jermaine Dupri, who formed and produced the hip hop duo Kriss Kross and has worked with artists such as Usher and Mariah Carey. Unlisted on the bill, it appeared most people were unsure what to make of him at first.

Dupri mixed hype tracks like Wiz Khalifa’s “We Dem Boyz” as well as “Panda” by Desiigner and encouraged the crowd to get up and dance so they would be warmed up for Beyoncé. Although most of the crowd was hesitant to get involved, by the end of his set people were having fun and dancing. But frankly it was more entertaining to watch the crowd dance than watch Dupri perform.

While Jermaine Dupri is a great producer, his live performance was quite predictable and didn’t challenge the crowd, but I’m not sure it was even supposed to. Most people sitting around me were just pleading for Beyoncé, and he ended his set with a remix of a Jay-Z song. While Queen B may have forgiven Jay for his alleged betrayals, I certainly have not, so I felt it very inappropriate to bring up his disloyal face in the sanctuary that is a Beyoncé concert.

As the sun set, the visual elements of Beyoncé’s tour rig came to life. The enormous cube dominating the center of the main stage began to glow and before I knew it, it burst into life with the first of many sublime video elements of the tour, some of which were interspersed with clips from Lemonade. As soon as the first notes of “Formation” began, the entire crowd was on its feet and screaming for their ruler.

From the moment she hit the stage, Queen B’s fierce strength and honesty was on display. The concert was a celebration of self-love, unapologetic confidence and forgiveness (yuck!). Bey may have used some of the stage time to talk about forgiveness and moving forward, but she also led into “Me, Myself and I” by declaring the most important relationship in your life is the one you keep with yourself, to which me and the women around me roared with approval.

Her most honest and vulnerable moments were the most special. Each chuckle and crowd interaction was tender and loving. She consoled an emotional fan, squeezed hands with those stage-side, offered the microphone to singing fans and consistently reminded the showgoers how special they were. Imagine, the baddest, most powerful woman in pop telling a crowd of adoring fans that they were the special ones. During a simplified rendition of “Love On Top,” Beyoncé stopped singing and teared up as the entire crowd carried the tune for her.

While Bey is a powerhouse on her own, but her team absolutely makes the show as stunning as it is. Throughout the performance were well-placed moments intended to showcase her mind-boggling backing band, The Sugar Mamas. The drum solo after “Pop My Trunk” displayed some seriously insane gospel chops, and the ripping guitar solo that riffed off of the sample in Kanye’s “New Slaves” that led into “Don’t Hurt Yourself” was, in a word, awesome.

If stunning musicianship and Bey’s perfect pipes weren’t enough, the choreography was sharp, visually enthralling and perfectly executed. Her dance troupe was not meant to be a background bonus. They felt like Beyoncé’s squad, a group of individuals with captivating personalities there to remind the crowd that powerful women travel in packs.

Nearing the end of the show, the martial drums of “Freedom” rolled out as she and her dance troupe marched out to a shallow pool of water at the end of the stage. The anthemic track burst to life as the dancers splashed, and the song climaxed with the troupe and Beyoncé shouting “God” into the air.

It felt like a baptism, each member of the crowd being initiated into a church of powerful womanhood and defiance. The segue into “Survivor,” a Destiny’s Child track, was accompanied by dancers throwing their fists in the air, an important reminder that her art is just as much about Black Power as it is about the power of women.

I had peeked at the set list ahead of time to see what to expect, and when I saw “Halo” was listed as the last song I was skeptical. I’m not much of a ballad fan, and it seemed weird to end with a love ballad when she’s touring on a record about her husband’s infidelity. I was pleasantly surprised, however, and a little embarrassed to find myself getting emotional as Mother Beyoncé reminded the crowd that the ability to love someone else is an amazing gift.

The juxtaposition of powerful images, like Beyoncé as a Pharaoh in the same show as a montage of intimate family videos displaying Bey’s motherhood and marriage, revealed the multi-faceted aspects of womanhood. While some debate the substance of her feminism, this particular performance revealed that Beyonce is doing a great deal to force people to reconcile the fact that women can run empires and blow stadiums away and also be loving wives and mothers at the same time, not to mention retain sexuality as a powerful element of your identity.

On the Formation World Tour, Beyoncé proves in a matter of hours that you can work hard, be a loving mother, a sexual creature and a fulfilled human being as long as you love yourself first and foremost. I was thoroughly slayed.