Here's what's been going down in Pittsburgh:


1. Planned Parenthood says it will spend $30 million this election cycle, and this past weekend it trained more 1,000 volunteers from across the country at its two-day "Power of Pink" conference held in Pittsburgh. The event trained members on community organizing, media strategies and engaging the public on issues of reproductive and women's health in the months leading up to the election. 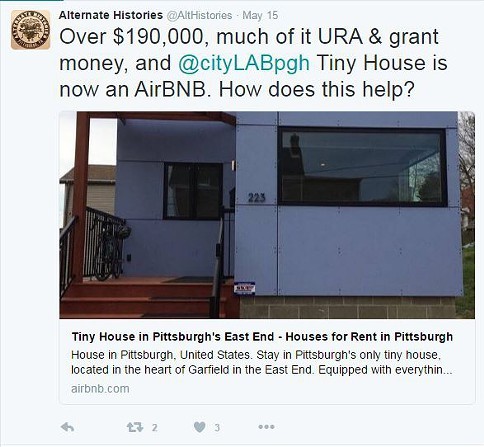 Screen capture from @AltHistories twitter account
2. The tiny house in Garfield popped up on Airbnb at least twice over the past month. Some are questioning whether advertising the house as a bed and breakfast conflicts with public money the project has received from the Urban Redevelopment Authority. “Posting it on Airbnb could lead one to believe that her using it as a bed and breakfast may be occurring more than occasionally,” wrote Rick Swartz, of the Bloomfield-Garfield Corp., to CP after the first Airbnb posting two weeks ago. “I don't think the URA would accept this, and could conceivably require the developer, cityLab, to repay the $49,000 in URA funds that the project received.”

Photo by Rebecca Nuttall
3. Pittsburgh Public Schools has selected its new superintendent. Anthony Hamlet, formerly of Palm Beach County's school district, brings more than a decade of experience as a teacher and principal for both alternative learning institutions and suburban schools. In his current role he serves as director of school-transformation accountability. (He also played professional football for the Seattle Seahawks and Indianapolis Colts.) Hamlet will replace retiring Superintendent Linda Lane, who has led the district since 2010.

Photo courtesy of University of Pittsburgh
4. Terrace Hayes, the well-known Pittsburgh-based poet, has snagged another high honor. He received both an American Academy of Arts and Letters award in literature — he's in good company with the other winners, including Ta-Nehisi Coates, author of Between the World and Me — and, most recently, election into the venerable American Academy of Arts and Sciences. Hayes won the National Book Award in 2010 and was awarded a MacArthur Fellowship "genius grant" in 2014. In 2015, his most recent collection, How to Be Drawn, was a finalist for both the National Book Award and the National Book Critics Circle Award.

Photo by Ryan Deto
5. The Allegheny County Jail Health Justice Project is launching a documentation campaign in response to more than 20 complaints they say they've received from inmates and their families. “The ACJ Health Justice Project has continued to receive stories of severe medical neglect and abuse at the Allegheny County Jail, even after the supposed county takeover of health care in September of last year. People incarcerated at the ACJ go weeks if not months without the medication they need to survive and be well," says ACJ Health Justice Project member TeOnna Ross. Project organizers say they are looking to compile more than 200 stories of neglect and abuse at the jail. County officials say they met with the advocates months ago and asked them for documentation of alleged claims, but the advocates were unable to provide them.

Photo courtesy of Michael Sahaida
6. The Pittsburgh Symphony Orchestra will be live-streaming a concert from Berlin this Sunday — their first ever public simulcast at Heinz Hall and on their website. “[The Berlin Philharmonic has] an incredible technical set-up there which is equivalent to the Met broadcast from the Metropolitan Opera,” says Pittsburgh Symphony Orchestra President Melia Tourangeau. “So what we’re doing is basically taking advantage of that system and doing a live feed of the concert back to Heinz Hall in real time. It will be as if you’re sitting in Berlin watching the Pittsburgh Symphony.”

WaynoVision
Hear the man behind WaynoVision on our podcast this week. Wayno talks to us about his sense of humor and his process for illustrating WaynoVision, which we began featuring in City Paper's print edition this week.

Photo courtesy of Peter Morsillo
Meet City Paper's Summer Guide cover artist Emily Traynor in our Q&A. Traynor talks to us about her whimsical style and her favorite neighborhoods in Pittsburgh.

Every week on our FFW music blog, we make a Spotify playlist containing tracks from artists mentioned in the current music section. Listen below!

It's that time again — Summer Guide time! Check it out for listings of music, film, arts, theater, kids' activities, outdoor adventures, and fairs and festivals. (If you picked up the print edition, color the Summer Guide picture on page 64, and send a photo to PghCityPaper on Snapchat for a chance to win a City Paper prize pack.)

In 2009, City Paper caused quite the stir with its "Mon-Monkeys" Summer Guide cover. Artist Mario Zucca drew the cover, based on the ads in the backs of old comic books that sold Sea Monkeys — underwater creatures that could be “trained to do tricks” and “entertain.” Our spoof instructed readers that for $2.50, plus $1.50 shipping and handling, they could get a Mon-Monkey starter kit by sending the money and order form to the Allegheny Conference on Community Development. (Our spoof was so obviously fake that we thought nobody could mistake it for a real product. After all, we said these creatures could be trained to wave tiny towels above their heads and vote for members of the Zappala family.) Not only did we receive inquiries at City Paper offices about ordering the creatures, but the ACCD received several order forms in the mail that included real checks for a fake product. Two weeks later, CP issued a clarification under the headline: “Mon-Monkeys do not exist.” Read more about what happened this week in City Paper history.

Editor's note: This post has been updated to include news about the Allegheny County Jail Health Justice Project, as well as the Pittsburgh Symphony Orchestra. 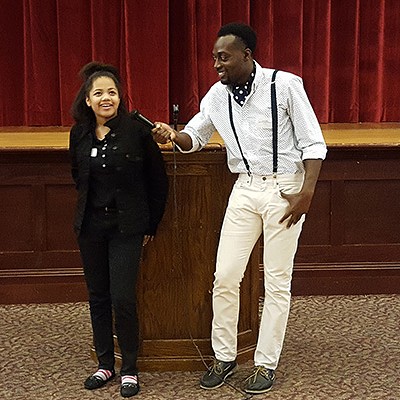 Smart Is Cool hosts health and wellness summit in Wilkinsburg

On tour in Berlin, Pittsburgh Symphony Orchestra streams live back to Heinz Hall