Pittsburgh's tiny house keeps popping up on Airbnb, could be a violation of its URA loan | Blogh

Pittsburgh's tiny house keeps popping up on Airbnb, could be a violation of its URA loan

Last month, Garfield’s now-famous tiny house sold for $109,000 (its full asking price). But ever since becoming a legitimate, owner-occupied home, the micro house has been living a peculiar life on the internet. The 330-square-foot-home has popped up on the residence-rental site Airbnb at least twice over the past month, each time mysteriously vanishing into thin air about an hour after posting.

Matt Buchholz, an artist who lives a few blocks from the tiny house, says he spotted the listing on Airbnb Sunday night and then screen-grabbed it and posted it on his twitter account (@AltHistories). A City Paper staffer also saw the tiny house posted on Airbnb about two weeks ago. Both times the posting was taken down within an hour. 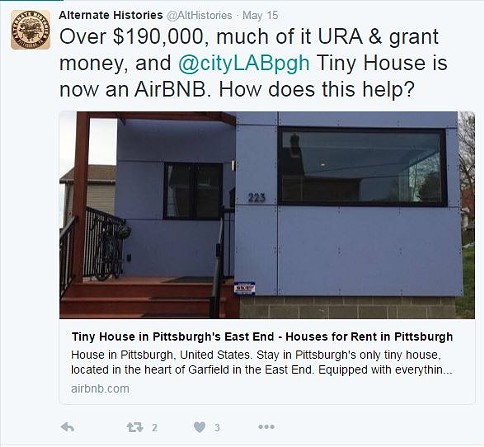 Screen grab from @AltHistories twitter account
Another Garfield neighbor, who asked to remain anonymous, wrote to CP that the posting “was marketed as centrally located, 15 minutes to ‘anywhere you want to be.’” Buchholz says the listing showed the host’s name as “Anne Marie” and indicated that the cost to rent the house was $99 a night.

“The fact that it's been listed and taken down twice is very odd,” wrote Buchholz in a message to CP, “and the whole use of it as an Airbnb is at odds with cityLab's [the home’s developer] stated purpose.”

The tiny house was billed as a way to provide affordable single-family homes in blighted neighborhoods in Pittsburgh. Unforeseen site costs led to a bloated price tag — $109,000, and that low only because cityLab received more than $80,000 in grants from the city’s Urban Redevelopment Authority and other sources.

Rick Swartz of the Bloomfield-Garfield Corporation confirms Buccholz’s suspicion. Swartz says the house's owner told the developer, Eve Picker, that she and her partner would occasionally make the tiny house available to local artists, when they were out of town. The owner would work with local arts groups to let them know when the space would be available, on a limited basis, according to Swartz.

“Posting it on Airbnb could lead one to believe that her using it as a bed and breakfast may be occurring more than occasionally,” wrote Swartz to CP after the first posting two weeks ago. “I don't think the URA would accept this, and could conceivably require the developer, cityLab, to repay the $49,000 in URA funds that the project received.”

After the first posting, Swartz wrote that the fact that it was taken down quickly "may be an indication that the owner is pulling back on this." CP reached out to the developer, Picker, after the second posting, but she did not return calls by press time.

URA chair Kevin Acklin said back in October 2015 that the city was happy to invest in the tiny house and that it was a “great pilot” for an effort at a sustainable home. “It was worth the investment,” he said. “whether it is scalable, is yet to be seen.” 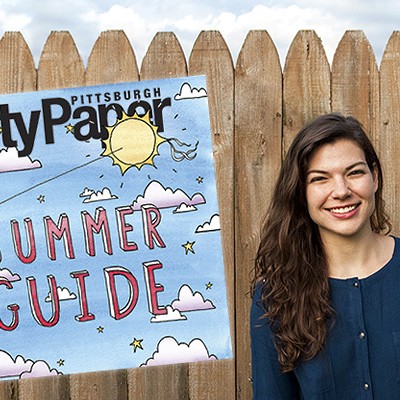