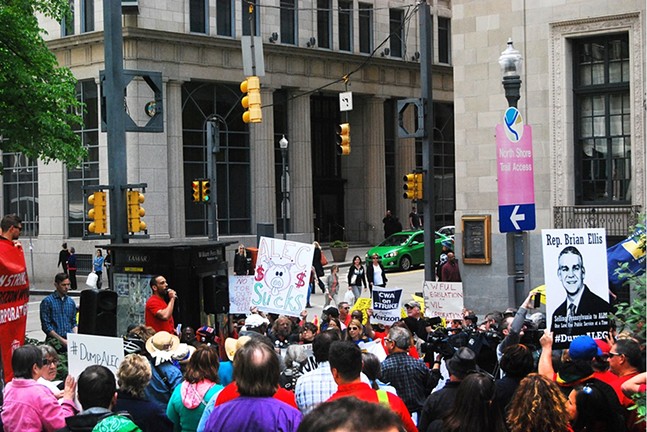 Photo by Rebecca Nuttall
A large crowd gathered outside the Omni William Penn Hotel Friday to protest a meeting of members of ALEC (American Legislative Exchange Council)
A crowd of more than 100 gathered outside of the Omni William Penn Hotel today to protest the meeting of the American Legislative Exchange Council in Pittsburgh this week — better known as ALEC. The conservative group, which dubs itself a nonprofit, has been tied to the passage of legislation such as Florida's "Stand Your Ground" law and voter identification laws among many others.

"This is our state and our democracy and we aren't going to let a bunch of corporate hacks take it from us," said Sam Williamson, SEIU. "ALEC is about restricting our voting rights."

According to One Pittsburgh, who helped organize today's event, the ALEC conference brings together "corporate lobbyists and wealthy funders from around the country to wine and dine conservative lawmakers promising them hefty contributions in exchange for supporting state legislation that weakens worker and environmental protections, eviscerates public education, lowers wages, and hollows out communities of color for corporate profit."

Critics challenge ALEC's lack of transparency. The group doesn't disclose it's members or the lawmakers they meet with. But in 2011, the Center for Media and Democracy revealed 800 model bills and resolutions ALEC had worked on.

Along with labor organizations, faith groups, and other social justice activists, today's rally was largely attended by Verizon employees who are currently striking for better wages a nd benefits. A former Verizon Communications lobbyist served as executive director of ALEC from 2011 to 2014.

"The profits for Verizon are frightening. They want to attack our call centers, move our jobs overseas," said Communication Workers of America western region vice president Thomas Crawford. "We're not going to take it. We built this company."

In addition to involvement with Florida's "Stand Your Ground" law and voter ID laws nationally, ALEC has developed model crime legislation like the "three strikes" law which imposes harsher sentences on repeat offenders.

"Corporations like ALEC and their politician allies meet behind closed doors everyday to worsen our criminal justice system," said Brandi Fisher, president of the Alliance for Police Accountability. "ALEC is a driving force in maintaining a system that criminalizes the poor."