“One Flew Over the Cuckoo’s Nest” at barebones productions | Blogh

Three performances remain of the troupe’s well-produced staging of this 1963 play by Dale Wasserman. 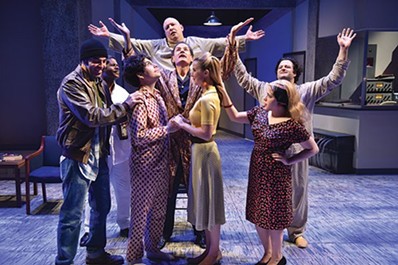 Photo courtesy of Louis Stein
A scene from barebones' "One Flew Over the Cuckoo's Nest"
For many of us, the stage work will be heavily shadowed by the 1975 Milos Forman film, among that decade’s cultural touchstones. But part of the play’s value is that it’s much closer to the spirit of Ken Kesey’s 1962 novel, the source material for both play and movie.

While the story’s premise and main and supporting characters are the same, the film and stage versions are framed differently. The film is a Jack Nicholson vehicle that spotlights inmate Randall P. McMurphy’s power struggle with psych-ward dictator Nurse Ratched; the play, like Kesey’s book, is actually narrated by a character who in the film doesn’t even speak: Chief Bromden.

The Big Chief’s scene-opening monologues — like his dialogue later in the play — frame the story less as a matter of personal rebellion, with McMurphy as rebel hero, and more as an allegory about the Keseyian notion of the Combine, the invisible bureaucratized power structure that controls all, turning its servants (like Ratched, and two of the psych-ward orderlies) into merciless automatons and its victims (the patients and inmates) into neutered prey.

As befits its time and Kesey’s legend, it’s all very proto-counterculture (and, at times, pretty Freudian). But this is also a way of looking at the play that helps explain its unfortunate gender politics: In a mid-century milieu where men held even more of the political and social power than they do now, Kesey invests all the repressive authority of the Combine in a female character, even while blaming offstage female characters (Billy Bibbit’s mother; Bromden’s mother) for other ills. Yet as framed by Bromden's monologues, you might see each of the characters as an expression of the Combine's warping influence.

At any rate, here’s Stuart Sheppard’s rave review of the barebones production for CP.

The remaining performances are at 8 p.m. nightly, tonight through Saturday, at the New Hazlett Theater.

The New Hazlett is located at 6 Allegheny Square East, on the North Side.