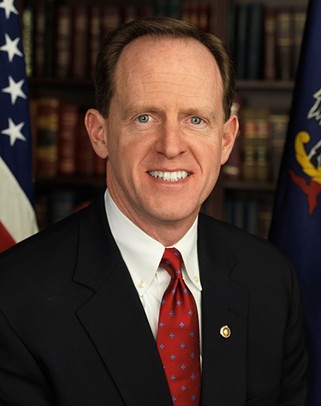 Mere hours after Scalia's passing, Republican officials were announcing they wouldn't accept a nomination from Obama who is serving the final year of his final term. To date they've kept their promise and leading that cry has been local Pennsylvania Sen. Pat Toomey.

“With the U.S. Supreme Court’s balance at stake, and with the presidential election fewer than eight months away, it is wise to give the American people a more direct voice in the selection and confirmation of the next justice," Toomey said in a March statement. "Should Merrick Garland be nominated again by the next president, I would be happy to carefully consider his nomination, as I have done with dozens of judges submitted by President Obama.”

"I'm very certain that these senators who are holding up this nomination are going to strike out. It's going to be a very bad situation in the fall for Republicans if this continues," said Richard Painter,a professor of corporate law at the University of Minnesota Law School and former counsel to President George W. Bush."The senate can't appear or even suggest to the public that they will think about doing their job which is to have a hearing. We've had hearings every single time since 1916. Sometimes those hearings are ugly, but there has been a vote and a hearing for every single nominee. The senate needs to do their job."

Garland is the chief judge of the United States Court of Appeals for the District of Columbia Circuit. He has served on that court since 1997 and no nominee before him has had as much judicial experience.

And by all accounts Garland is a moderate choice for Supreme Court. In fact in a 2010 interview with Reuters, Republican Sen. Orrin Hatch, who is thought of as the senate's expert on the constitution and Supreme Court, called Garland “a consensus nominee” and said there was “no question” Garland would receive bipartisan support. Now Hatch is one of the senators opposing Garland's nomination.

"Six years later, I believe the behavior of senators Hatch and Toomey is disgraceful and dangerous," said Craig Green, a law professor at Temple University Beasley School of Law and former clerk to Garland. "This is the first time in history the senate would defeat a nominee with literally no action at all. In the words of the presumptive Republican nominee, 'delay, delay delay.' And they would do so for the worst reason imaginable: because they can. I think it's not just a disservice to America which of course it is. I think it's not just a disgraceful act of partisanship, which of course it is. But I think it threatens the future of the confirmation process, if it is to succeed. And I think that in turn threatens the institution of the court and indeed the application of the law in the future of the country."

The experts said the latest struggle for control of the Supreme Court demonstrates how the highest court in the land has shifted from being non-partisan to more political than ever before.

"I think a doctor listening to us would say we're describing the symptoms of an institution that is truly ill, the Supreme Court. It's still the most admired institution in the country, but now respect is lower than 50 percent, unheard of." said Richard Brean, general counsel, United Steelworkers. "[People now] think of the Supreme Court as slow motion politics."