Pittsburgh's Latino population is growing, and that's a fact not lost on the leadership of the Port Authority of Allegheny County. Today PAT officially launched its Spanish-language ad campaign. Billboards and bus-shelter posters featuring the ads will soon pop-up in the areas with the highest concentration of Latinos: Oakland, Brookline and Beechview. Already, some Spanish-language ads have hit news stands, including an ad in last weeks print version of City Paper.

"Port Authority serves a diverse group of riders, some who don't speak or read English," said PAT CEO Ellen McLean at last weeks PAT board meeting. "We want riding not only to be easy, but friendly and inviting for everyone." 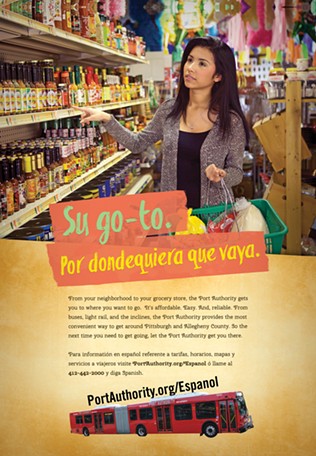 Image courtesy of Port Authority
In English the ad reads: "Your go-to, where ever you go."
The campaign will also involve handing out tote bags with the ads in English and Spanish at Las Palmas grocery stores in Oakland, Brookline and Beechview; and at Salud Para Ninos, a bilingual pediatric clinic in Oakland. PAT also just launched a Spanish-language website at portauthority.org/espanol, that offers explanations on how to use the PAT bus and light-rail system and how to translate the regular PAT homepage into Spanish.

“We are proud in Allegheny County to be part of a larger effort to create a welcoming community so that we can maximizes opportunities for economic growth and position this region as a globally competitive, 21st century leader,” said Allegheny County Executive Rich Fitzgerald in a press release. “We want everyone who calls our county home to be able to integrate into the social fabric here, and providing resources and services in their language, as well as in English, is just part of that effort.”

PAT spokesperson Adam Brandolph says this is the first time that the transit authority has launched a marketing campaign in a  language other than English, and that Spanish made sense as the place to start given the growing Latino population in the area.

"We obviously have seen the growth of the Latino community in the county," says Brandolph, "and thought it was a good opportunity to increase the awareness of [the PAT] to the Latino population."

Read more about Pittsburgh's growing Latino community in the May 11 issue of City Paper.