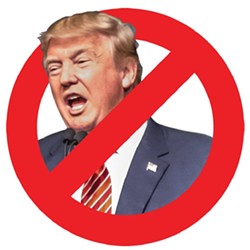 Image from the Facebook page for the ANSWER Pittsburgh event
Almost as soon as emails went out announcing this week's Donald Trump rally and town hall meeting in Pittsburgh, an onslaught of anti-Trump events were announced as well. Protesters have announced they will demonstrate at the Trump rally at the David L. Lawrence Convention Center and at the townhall meeting at the Soldiers and Sailors Museum.

"The Trump campaign has dredged up and mobilized the worst elements of this country’s history — white supremacy, immigrant-bashing and mob violence," says Taylor Goel, Pittsburgh coordinator of the ANSWER Coalition, an anti war and racism group. "What he calls making America “great again” is understood by all oppressed people, and people of conscience, as a return to that ugly past."

ANSWER is just one of the groups organizing protests at the two Trump events in Pittsburgh this evening. The organization has hosted rallies in many of the states Trump has visited, including Illinois and Arizona and will protesting outside of the rally Downtown.

"Trump’s hateful campaign, targeting the Muslim people, Latino communities, in attempting to divide and attack so many, has instead resulted in a deepening of the understanding of the commonalities that exist between different oppressed communities," Goel says. "From Chicago, to Pittsburgh and onward, we will continue to go onto the streets to confront Trump and his nationally growing racist movement. Ultimately this is what will be needed, a united multinational mass movement to effectively beat back the right-wing."

The groups WHAT’S UP?! Pittsburgh, Three Rivers Rising Tide, The Fourth Wave, and Fossil Free Pitt will also be protesting Trump's visit in Oakland. At 2:30 members of the groups will meet outside the Frick Fine Arts Building and use creativity as an outlet for their frustration with Trump's campaign.

"We're really just trying to create an alternative space that is loving caring, that shows people we aren't just out here for the sake of being pissed off. We're here because we care about people. Love Trumps hate and we're going to make that real today," says Andrew Wolmer, an environmental activist with Fossil Free Pitt. "Our organization primarily focuses on environmental justice issues and the fossil fuel industries disproportionately effect low income people and people of color and indigenous people. We care about these people and we see a lot of things coming out of the trump campaign that are against our values."

At 4:30, students from the University of Pittsburgh will gather with with other members of the public at the corner of 5th Avenue and Bigelow Boulevard to protest Trump's appearance with Sean Hannity at Soldiers and Sailors Hall. There will also be a sit-in at this location.

And at 5:30pm, members of WHATS UP Pittsburgh, Three Rivers Rising Tide, and others will gather at the corner of Liberty Avenue and Grant Street Downtown. before converging on the convention center with members of the ANSWER Coalition.

Stay tuned to www.pghcitypaper.com for all the latest on the Trump rally and protests and also follow us on Twitter and Instagram. Also check out this week's CP cover story on the "Five Realities Donald Trump has shown us about America."