Vince Dorse's 2016 Primary Election Guide cover, and a self-portrait of the artist
Vince Dorse and I have been cheering every single time Hillary Clinton, Bernie Sanders and Donald Trump win another primary race or caucus. That’s because Vince finished this week’s cover illustration a month ago. and the entire image would have been ruined if one of the three candidates pictured on our cover had dropped out before our Election Guide hit the streets today. (See This Week in City Paper History for what happened to us back in 2012 when Rick Santorum dropped his presidential candidacy.) Usually, artists that work with Pittsburgh City Paper only have a few days to begin and complete their illustrations. But we knew we wanted to use Vince for our concept back in February, so I assigned it out to him then, letting him know he had over a month to take his time and stew over it. An entire month! Only, he sent me a sketch two days later and finished the piece on March 10 … 34 days ago.

That eagerness is one of the reasons Vince is so much fun to work with. Having someone getting excited about the projects you assign out doesn’t just make our jobs easier, it really shows in his work. Vince, who lives just south of Pittsburgh and shares a studio with an “attention-starved cat,” is an award-winning cartoonist: His web comic Untold Tales of Bigfoot won an esteemed Reuben comics arts award for Best Online Comic, Long-Form. This week’s Election Guide is his 10th cover for us, but not the first to feature a controversial figure. We talked to him over email about political cartoons and his first City Paper hate mail.

We finished this cover a month ago! How relieved are you that Clinton, Trump and Sanders are all still in the race?
It’s nice to finally stop worrying whether you’ll make me erase someone from the composition before it goes to print. Normally, I don’t get more than a long weekend to do these covers, but this was finished waaaay early and the suspense over whether it would be killed at the last second has been excruciating. I don’t know — part of me might actually enjoy those rush jobs.

Do you have a favorite political cartoonist?
Every so often, I run into award-wining editorial cartoonist Rob Rogers [from the Pittsburgh Post-Gazette] at a Pittsburgh Cartoonists Lunch, so I should probably name him here so he doesn’t spill his drink on me — but mostly because he’s really good at what he does. Thing is, I don’t normally seek out political humor/commentary. Despite all the politically-themed illustrations you’ve hired me to do, I’m really not an overtly political guy, so I don’t have a deep well of experience to draw from for this answer. What I will say about Rob’s stuff is that, regardless of the message, he manages to make his cartoons both funny and poignant, and that’s a killer combination when you’re trying to catch even the casual reader’s eye.

If you could put any celebrity in your dunk tank, who would you choose to get soaked?
Any celebrity? From any age? I don’t know. Maybe later-period Orson Welles or Marlon Brando because they’d displace a lot of water and their level of indignation would be epic. It’s a comedy one-two punch.

Have you ever wished a politician you didn’t like would win a race, just because s/he would be so much fun to draw?
All politics aside, I was really glad Bill Peduto ran for mayor of Pittsburgh because that guy is just a blast to cartoon. He’s got really identifiable features that lend themselves well to comedic exaggeration. During the run-up to his election I was doodling Pedutos (Pedoodling?) every week so I’d be ready if you tapped me for a cover or spot illo. And you did! I’m actually mildly disappointed he hasn’t done anything really scandalous enough to warrant more editorial cartoons. But, just so you know, if he does, I’ll be ready.

What’s the best thing about being an artist in Pittsburgh?
You probably know this already, but Pittsburgh’s got this robust community of illustrators and cartoonists that’s amazingly supportive of its members. Interacting with that community, you improve at your craft, you network, you hone oft-neglected social skills — and, honestly, in my experience, the creative community in Pittsburgh has always been very welcoming and generous with their time and energy. 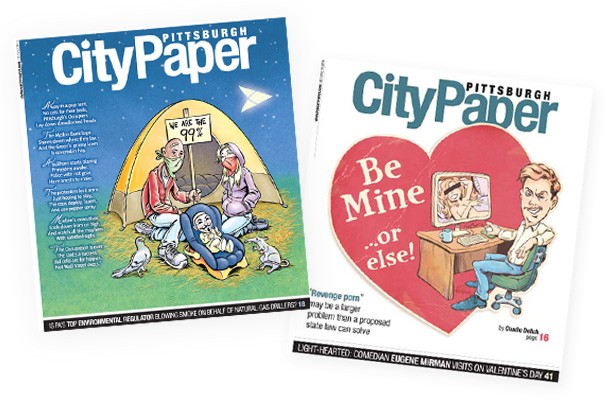 Where did you learn your skills?
I’ve been drawing stuff since I was a kid, and I studied art in school, but the learning never really stops. I’m still running through tutorials online, devouring art books and magazines, and pestering other illustrator/cartoonist friends incessantly in an effort to get better at this. I mean, ask a few of your other City Paper cover artists. Vince? Yeah, if I have to have one more discussion with him about line weight, composition or color theory, I'll block his email. But really, learning new skills and improving the old ones is a constantly rewarding facet of the work.

You won a Reuben comics arts award for your popular web comic Untold Tales of Bigfoot, featuring a super cute Sasquatch and his buddy, Scout the dog. What are Bigfoot and Scout up to these days?
Bigfoot and Scout are currently helping me put together an upcoming Kickstarter campaign (that should launch in the next couple months) to get their first story in print. They’re also running around in my head on their next adventure. Still in the outline stage, but I hope to start putting images on paper soon. Can’t wait, really. In the run-up to all this, I’ll probably post some shorter Untold Tales of Bigfoot adventures to work the fandom into an appropriate frenzy.

What’s the strangest thing you’ve ever received from a fan of your comics?
I get a lot of news stories and links about Bigfoot sightings. But I don’t think of them as strange, I think of them as research.

I’m not sure if you remember, but your very first cover for us — a 2011 Christmas-themed illustration of an Occupy Pittsburgh couple protesting in a manger scene, featuring a baby wearing a Guy Fawkes mask — caused someone to rip the page out of the paper and mail it back to us with handwritten insults scrawled all over it because they disagreed with our politics. Have you ever gotten any hate mail for other things you’ve drawn?
Oh, I remember that incident, all right. If I recall correctly, the reader circled my signature and drew an arrow to the word “evil.” That was jarring. In fact, it still comes to mind whenever there’s a politically-charged illustration job from you waiting in my in-box. Who’s Lisa gonna have me rile up this time? But no, most of the time I’m drawing puppies and kitties and Bigfoot, so it’s hard to get worked up too much over that stuff. But who knows? This week’s CP cover’s got trouble written all over it.

I love your behind-the-scenes process blogs, where you give really great details into what goes into making an illustration come to life. Will you have one of those for this week’s cover we can check out?
Of course! Because we had so much lead time on this assignment, I was able to put together a bunch of process images while I was working on it. The finished how-to is up at my process blog, vincedorse.wordpress.com.

You see also see more of Vince’s work at www.vincedorse.com and by following him on Twitter at @vincedorse.