The gloves have finally come off in the Democratic contest for Pennsylvania’s open U.S. Senate seat.

Last night, WTAE broadcast a live debate between senate candidates Braddock Mayor John Fetterman, Gov. Tom Wolf’s former chief of staff Katie McGinty and former U.S. Rep. Joe Sestak. Up until this hour-long forum, the candidates had remained mostly cordial to each other during debates and focused on their policies, many of which were very similar. 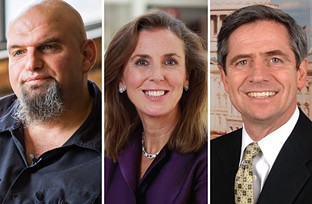 Photos courtesy of candidates
John Fetterman, Katie McGinty, Joe Sestak
And while some similarities were shown last night too (all three candidates said they embraced immigrants coming to U.S. and lifting the Cuban trade embargo), some differences emerged and not in the most polite ways.

The first scuffle involved McGinty accusing Sestak, the current front-runner according to polls, of supporting social security cuts when he backed the template for Simpson-Bowles, a broad budget-deficit reduction plan that included some social security cuts. (The plan never received the necessary votes for implementation and representatives from Sestak's campaign point out that the former Congressman did not back the entirety of the plan).

The subject of fracking, or natural-gas drilling, led to the most contentious moment of the debate. McGinty accused Sestak of flip flopping on his call for a moratorium on fracking (which he said was not true and a misleading statement), and Sestak responded by citing McGinty’s ethics committee investigation during her tenure as Pa. environmental secretary. Fetterman then insulted McGinty citing her role in supporting fracking while environmental secretary saying “there is no such thing as a green fracker.” McGinty responded by touting her endorsements from environmental groups and accused Fetterman of having a higher percentage of financial support from frackers and energy companies than her campaign. Fetterman denied this accusation.

(Check City Paper’s PolitCrap blog next week to read our coverage digging into the the candidate's political contributions and their position on the Citizens United campaign finance ruling.)

The candidates also differed sharply on responses to the fight between the FBI and Apple in unlocking the phone of the San Bernardino shooters. Sestak touted his naval career (he is a retired three-star Navy Admiral) and his support to cut the number of naval ships and focus those resources on cyber crime and McGinty said there should be a compromise between the government and companies like Apple. Fetterman took a stronger stance, saying both Sestak and McGinty gave “non-answers” and said he supported Apple for not wanting to create encryption software to unlock the shooter’s phone. He said this could lead to abuses by governments around the world.

The latest poll from Harper Polling, puts Sestak in the lead with 41 percent, McGinty in second with 31 percent, Fetterman in third with 9 percent and 19 percent of pollsters were undecided.

For future political fisticuffs, make sure to tune into WQED on Saturday April 9 at 8 p.m. to watch the three candidates square off again. Pennsylvania's primary elections will be held on April 26 to decide which Democratic candidate will go head-to-head with Republican incumbent Senator Pat Toomey in November.

Editor's note: Information about Sestak's support for Simspon-Bowles has been updated to better reflect Sestak's position.