Poetry and Race in America at the University of Pittsburgh | Blogh 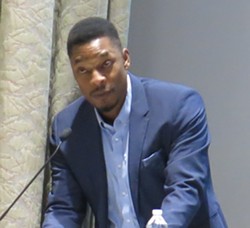 Photo by Bill O'Driscoll
Terrance Hayes at last night's event
Last night’s standing-room-only crowd at the Frick Fine Arts Auditorium heard a sampling of work from a distinguished cross-section of African-American poets — and concluded with an illuminating discussion of how poetry can affect the discourse on race.

The event, which drew about 400, was co-sponsored by Pitt and the Pitt-based Center for African American Poetry and Poetics, a new organization that hinted at its potential by hosting six top poets from around the country. They included Ross Gay, who teaches at Indiana University and whose collection Catalog of Unabashed Gratitude (published by the University of Pittsburgh Press), just last week won the 2015 National Book Critics Circle Award for poetry.

The poets spanned three generations; each read two or three poems. Gay read the joyful “Burial,” about using his father’s ashes to fertilize a plum tree. Many of the evening’s poems explored the concept of worth. Pitt professor emeritus Toi Derricotte read her touchstone work “On the Turning Up of Unidentified Black Female Corpses.” (Derricotte is a founder of Cave Canem, the workshop/retreat for black poets with which everyone on stage has been affiliated.) Lyrae Van Clief-Stefanon, who teaches at Cornell University, read two poems inspired by her time as a student at Washington & Lee University – specifically, by the reverential treatment the school gives the memory of the horse ridden by Confederate Gen. Robert E. Lee. Nate Marshall, who teaches at Wabash University, in Indiana, read a line that went: "We know 'African American' is how you say 'nigger' in a board room."

The program, part of Pitt’s Year of the Humanities series, was subtitled “How the Humanities Engage with Social Problems.” It also included Brooklyn-based Rickey Laurentiis and Afaa Michael Weaver, a Boston-based English professor.

Mostly implicitly, the discussion that followed the readings took place in the context of ongoing racial strife: police shootings of unarmed black men, the rise of Trumpism. The host was Pitt professor Terrance Hayes, a CAAPP co-founder and co-director, and himself a National Book Award-winner.

Gay added that images of African-Americans, and of racial strife, spread very quickly because “There is a great deal of profit to be made from us thinking those are the only images.” Poetry provides other ways of seeing the world, he said.

From the crowd, Medina Jackson, a spoken-word artist and Pitt-based early-childhood educator, asked the poets to discuss their formative experiences with race as children. It drew some of the program’s more interesting responses.

Derricotte recalled growing up light-skinned and upper-middle-class in Detroit, and attending school with white kids (though she says she was aware of race from age 3). Weaver grew up in working-class Baltimore and says his chief childhood exposure to white people was Leave It To Beaver. Van Clief-Stefanon described her sort-of double life in a black Pentecostal home and among white classmates in a gifted program who said she didn’t seem black. Gay, who grew up in Levittown, Pa., had a black father and a white mother. Laurentiis, from New Orleans, got called “white” because he liked to read, and things like “dirty red” because of his skin and hair tone. And Marshall, from Chicago, said he really didn’t have any sense of white people, or of being black, until he was a teenager attending a magnet school with white classmates (and where they said the Pledge of Allegiance instead of singing).

Marshall’s witty white-on-black T-shirt, by the way, read, “Nothing is the New Black.”