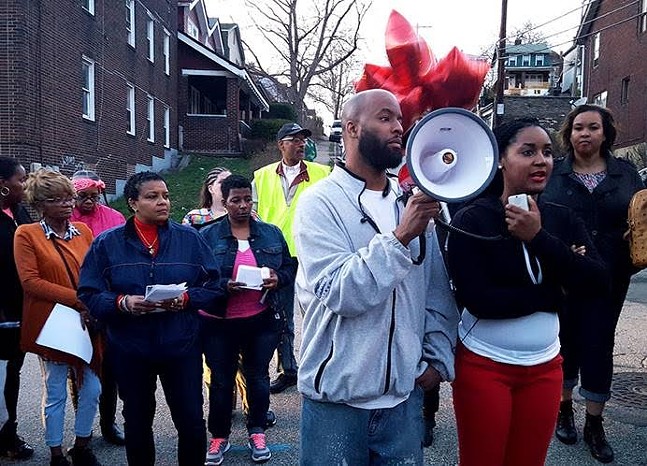 Photo by Rebecca Nuttall
A crowd gathers on Franklin Avenue in Wilkinsburg.
As the wind whipped through the trees on a blustery evening in Wilkinsburg, a group of nearly 50 marched up Franklin Avenue, pleading with residents to come forward with information related to last week's mass shooting that took the lives of five adults and an unborn child.

"People's faces were blown off," said Rose Brice. "People can't even lay their kids out [at funeral homes]. A baby was killed before it was born. And you're shutting your doors to this."

The March 9 shooting took place in the evening at a backyard barbecue at 1301 Franklin Ave. According to officials, the shooters approached the backyard from opposite sides before opening fire with an AK-47 and 40-caliber handgun.

"Family is about more than blood," Fred "Fu" Underwood said steps from the house where the shooting took place. "Your family is bigger than you know. These people are our family and anytime you lose family, it hurts." 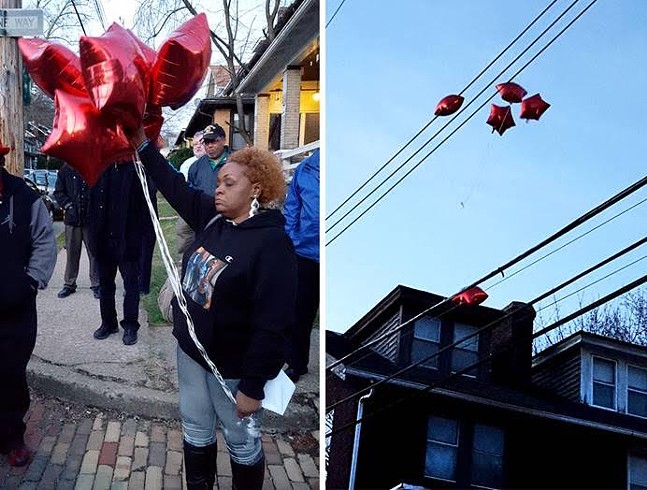 Photo by Rebecca Nuttall
Rose Brice releases balloons baring the names of the victims
Last night's rally brought together a coalition of community groups and Pittsburgh-area residents fighting to decrease violence in the region.

"I want to do whatever I can to stop the violence in my community," Jennifer Tracy said on her reason for attending the rally. "I'm for gun control. I'm for banning guns. People need to support stronger gun laws."

Also among them was Jay Gilmer, Pittsburgh's administrator for the the Pittsburgh Bureau of Police's Group Violence Intervention program.

"I'm here because we're concerned about violence wherever it is. Just because it's outside of the city doesn't mean it doesn't effect us. This impacts all of us," Gilmer said. "The Group Violence Intervention Strategy is one that should be embraced by surrounding boroughs so that it can be most effective. More deliberate collaboration by law enforcement can only benefit everyone."

Last night's rally was the culmination to a day of outreach for Rev. Janet Hellner of the Christian Church of Wilkinsburg who was door-knocking on the street and praying with residents earlier. Together with others from her church she says they prayed with approximately 12 households.

"It's devastating and our hearts are broken," said Hellner. "A lot of people here have been working on peace and justice issues for a long time. I said to my congregation Sunday, 'I'm tired, but I'm not weary.' There are people of tremendous goodwill working in Wilkinsburg."

Hellner said after the funerals for the victims she and other members of the Wilkinsburg community will begin looking at next steps for preventing more tragedies. At the end of the march, others also voiced their plans for addressing violence moving forward.

"We need to do this more often. Let's walk the streets so the kids can stay out of the streets," said Godfrey McCray. "This is everyday for us."

Pennsylvania campaign round up: U.S. Senate candidate Sestak releases TV ad; State House Rep. Ravenstahl gets a clear path to nomination thanks in part to his mom