Here's what happened this week in Pittsburgh:

Photo by Rebecca Nuttall
Allegheny County Police Superintendent Charles Moffat (left in tie) speaks to Allegheny County District Attorney Stephen Zappala (in windbreaker) at the scene of a mass shooting outside Pittsburgh Wednesday night.
1. A mass shooting in the Pittsburgh suburb of Wilkinsburg, where nearly 50 shots were fired, took the lives of five adults and an unborn child, and injured three more on Wednesday night. Allegheny County District Attorney Stephen Zappala called the murders "planned" and "calculated." "We haven’t seen something like this for quite some time, if we’ve ever seen this type of planning in terms of taking life," Zappala said at a press conference yesterday at the scene of the crime.

Witnesses claim there was a barbecue taking place at 1304 Franklin Ave. when two shooters approached the backyard from opposite sides. One approached via the alleyway behind the home and opened fire. According to Zappala, when witnesses tried to run toward the home, they were met by the other shooter, who approached from the side of the house.

"It was an ambush," Zappala told members of the media. "It wasn't like someone was squeezing off shot after shot. It was really methodical, very calculated."

Those with information on the shooting should contact the Bureau of Alcohol, Tobacco, Firearms and Explosives at 1-800-ATF-GUNS. 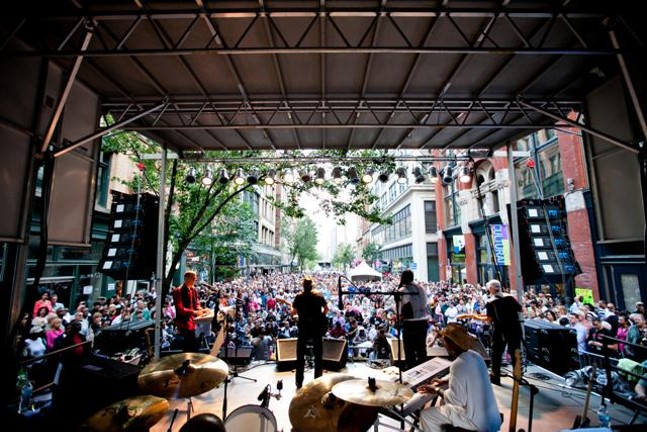 2. Greater Pittsburgh Arts Council's new report Culture Counts, released in late February, said that 25 million people attend arts and culture events in Pittsburgh annually, and that 75 percent of them get in for free — one possible explanation for why it seems that while arts attendance here is rising, ticket revenue is dropping. But how accurate is that 75 percent figure? This week, City Paper arts editor Bill O'Driscoll dug into the report, writing that according to the other report presented here that day, the Greater Philadelphia Cultural Alliance’s Culture Across Communities, from 2009-2012, the portion of Pittsburghers who attended cultural events for free was just 34 percent. O'Driscoll writes, "For its part, Culture Counts looked on the bright side, and cited its 75 percent figure as 'evidence of our sector’s commitments to public value and participation.'"

Photo by Aaron Warnick
3. The Fifth Annual B*tches Ball — a drag competition held to raise money for the Animal Rescue League — got its groove on Thursday night at the Pittsburgh Opera. We have a slideshow of performers who competed for the Miss B*tchburgh crown.


4. Another event that took place Thursday night: the Pittsburgh premiere of Fursonas, a documentary exploring the furry community. We caught up with Fursonas director Dominic Rodriguez and a local furry featured in the film, Boomer the Dog, who lost a local 2010 court case to legally change his name. See our video interview above, and read our Q&A here.

Photo courtesy of John Burroughs
5. The East End Book Exchange is up for sale as of this week. But owner and founder Lesley Rains emphasizes that she’s not selling because it’s doing poorly. “The store is fine,” she told City Paper in an interview today. “We’re not in debt. We’re profitable.” She’s also just signed a new three-year lease for the space on Liberty Avenue, where the five-year-old bookstore is located. “I’ve kind of plateaued … and it’s time to find some new energy and some new vision,” she said. 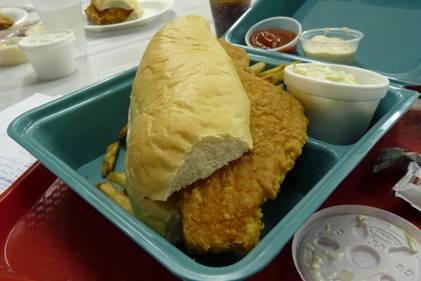 Photo by Ryan Deto
Former Pennsylvania environmental secretary and U.S. Senate candidate Katie McGinty released her “Economic Agenda for Women and Working Families” in a conference call with members of the media and female politicians from around the country. Her plan calls for supporting the Paycheck Fairness Act, which would grant more protections for women fighting pay discrimination; providing workers with paid family leave and sick days; making child care more affordable; increasing protections for women’s health; raising the minimum wage; and supporting female-owned small businesses. She touted her position as the only woman running in Pennsylvania for U.S. Senate by saying, “When the going gets tough, it is the women in the Senate who get things done.”

The Pennsylvania Democratic Party State Committee failed Saturday to endorse a U.S. Senate candidate in the upcoming April Primary election.  None of the three candidates was able to secure 67 percent of the vote, the number required for endorsement. (A fourth candidate received no votes.) On the final ballot, former state environment secretary Katie McGinty beat former congressman Joe Sestak 173 to 149, but again failed to reach the 215 votes necessary for a super-majority and the party's endorsement. As a result, the Democratic Party will hold an open primary. The most recent poll shows 56 percent of Pennsylvania voters remain undecided.

Photo courtesy of Chris Sprowls
This week’s MP3 Monday comes from Zoob, the solo project of Nathan Zoob. of Wreck Loose and Mark Dignam's band. Stream or download “S.O.S.,” from the new EP Curriculum Vitae, below, then check out our Q&A with Zoob.

Each week we create a Spotify playlist for you, so listen up! It's like putting the City Paper to your ear.

Photo by John Harvey
It looks like Pennsylvania's medical-marijuana bill will finally reach the House floor for debate, possibly as soon as the start of the next legislative session, on March 14. For the past two years, the bill has been debated and stalled; it’s even passed the state Senate twice without ever being brought forward for debate on the House floor. However, relief for patients seeking medial marijuana could still be a ways off — possibly two or three years. “Medical cannabis does not magically appear when the bill is signed,” said Chris Goldstein. of Philly NORML, a marijuana-advocacy organization. Read more of staff writer Ryan Deto's news feature here.

Pittsburgh remains one of the country's most walked cities, says report