Photo by Rebecca Nuttall
Allegheny County Police Superintendent Charles Moffat (left in tie) speaks to Allegheny County District Attorney Stephen Zappala (right in windbreaker) at the scene of a mass shooting outside Pittsburgh Wednesday night.
After a mass shooting in the Pittsburgh suburb of Wilkinsburg last night took the lives of five and injured three more, Allegheny County District Attorney Stephen Zappala returned to the scene of the shooting earlier today to meet with the victims' families and address the public.

“The murders were planned, they were calculated, brutal," Zappala said. "We haven’t seen something like this for quite some time, if we’ve ever seen this type of planning in terms of taking life."

Witnesses claim there was a barbecue taking place at 1304 Franklin Ave. when two shooters approached the backyard from opposite sides. One approached via the alleyway behind the home and opened fire. According to Zappala, when witnesses tried to run toward the home, they were met by another shooter who approached from the side of the house.

"It was an ambush," Zappala told members of the media. "It wasn't like someone was squeezing off shot after shot. It
click to enlarge 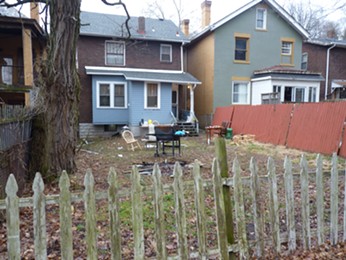 Photo by Rebecca Nuttall
The shootings took place in the backyard of this Wilkinsburg home
was really methodical, very calculated."

At 10:54 p.m. yesterday, Wilkinsburg Police were dispatched in response to a 911 call regarding the shooting. Detectives believe one of the assailants was using an AK-47 and the other was using a 40-caliber handgun.

"There's a lot of different theories," said Zappala. "We've taken several different scenarios off the table already and the detectives are working backwards. We think possibly one, maybe two, people were targeted. The rest of the people would be fairly characterized as innocent."

According to police, "two of the three victims that were in area hospitals remain there in critical condition. The third, the female victim, was treated and released."

"I knew them all, and I loved them all," said neighbor June Howard.
click to enlarge

Photo by Rebecca Nuttall
Wilkinsburg Mayor John Thompson
"They were all nice girls and they were good to the neighborhood. They were massacred."

Wilkinsburg Mayor John Thompson was among those at the scene today.

"My heart goes out to the families in this community. These are some truly dangerous individuals," said Thompson, who has lived in Wilkinsburg for more than 30 years and served as the borough's mayor for 12. "I think it brings up the conversation we need to have around gun control. This is the worst type of violence I've ever seen."

Also on hand to offer support were members of the Greater Pittsburgh Area MAD DADS (Men Against Destruction Defending Against Drugs and Social Disorder) who have been working in Wilkinsburg for several years.

"This strikes at the heart here," said MAD DADS President George Spencer. "We have mothers murdered here. Children were at the scene. It's tragic. We don't know why it happened."

"We've always been a presence in Wilkinsburg, and this is on a whole other level of violence," said Ernest Bey, a MAD DADS member. "We're still trying to wrap our heads around it and just praying for the families." Photo by Rebecca Nuttall
Members of the Greater Pittsburgh Area chapter of MAD DADS gather in Wilkinsburg Thursday morning.
Across town at a press conference in the Strip District about raising the minimum wage, local and state officials weighed in on the tragedy in Wilkinsburg. Gov. Tom Wolf said, “Gun violence is tied to poverty and 40 percent of Wilkinsburg is in poverty.

“I am a strong supporter of the Second Amendment, but we need to make sure that that right does not extend to criminals .... We need more legislation on background checks and mental health. We need to step up in Harrisburg and do our jobs.”

Allegheny County Executive Rich Fitzgerald also responded to the incident. In response to how leaders need to respond to the shooting, Fitzgerald said, “We have to stick together.”

“It is tragic that on the first spring day, a family decided to have a backyard barbecue to enjoy the weather, and this happened," Fitzgerald added. “It shatters what we think of community.”

(Ryan Deto contributed to this story.)