Free Admissions and the Health of Pittsburgh’s Arts Sector | Blogh

Free Admissions and the Health of Pittsburgh’s Arts Sector

Are Pittsburghers getting too much art for free?

You might think so reading Culture Counts, a new report from the Greater Pittsburgh Arts Council. Presenting the report on Feb. 26, GPAC’s David Pankratz said that 25 million people attend arts and culture events in Pittsburgh annually, and 75 percent of them get in for free. 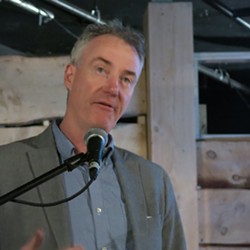 Photo by Bill O'Driscoll
John McInerney, of the Greater Philadelphia Cultural Alliance, speaks here Feb. 26
The number shocked some in the audience of about 100 at Downtown’s Pittsburgh Playwrights Theatre Co. space. “Oh, my god,” the arts professional seated next to me whispered to herself.

All those free rides were cited to help explain the fact that although attendance at local arts events is up, ticket revenues have plummetted. But what’s behind the numbers?

According to the other report presented that day, the Greater Philadelphia Cultural Alliance’s Culture Across Communities, from 2009-2012, attendance at arts events in Pittsburgh rose 7.9 percent, while ticket revenue dropped 24 percent.

That’s a real conundrum, especially because among the 11 cities the arts-advocacy group studied from across the country, attendance on average rose by just 3 percent even while earned income rose, on average, by 25 percent.

Indeed, ticket revenue, admissions and tuition for arts groups here make up the smallest percentage of total income of any city in the survey – about 13 percent, versus the average of 20 percent. And while that's partly due to pricing – the average ticket in Pittsburgh ran $15.97, lowest but for Phoenix – analysis at the Feb. 26 event focused on unpaid admissions.

“A lot of the growth in attendance in Pittsburgh was for free,” said John McInerney, vice-president of research and communications for GPCA. The 75 percent figure was repeated in press coverage of the event.

But how accurate is that figure? True, it might sound plausible if you consider the huge numbers of people who flock to free events like the Three Rivers Arts Festival and the Pittsburgh Cultural Trust’s quarterly gallery crawls. Not to mention the smaller numbers who visit all the free art galleries around here year-round.

For its part, Culture Counts looked on the bright side, and cited its 75 percent figure as “evidence of our sector’s commitments to public value and participation.”

But the 75 percent figure is somewhat misleading. For instance, Culture Across Communities says that from 2009-2012, the portion of Pittsburghers who attended cultural events for free was just 34 percent. That was in fact the lowest percentage of free events in any of the 11 metro areas included in the report.

Why the discrepancy? Well, for one thing, Culture Across Communities covered from 2009-12, while the Culture Counts numbers appeared to date from 2014. More importantly, GPAC and GPCA pulled from two different data sets: GPAC surveyed about 1,000 arts and culture groups in the nine-county Southwestern Pennsylvania region, while GPCA looked at the 175 organizations here from whom it had detailed data.

That might make it sound like GPAC has much more representative numbers. But GPCA examined a pool of groups that tended individually to be larger, and so probably represented two-thirds or more of the total attendance in the region, said McInerney in a followup interview last week — a reasonably good sampling.

Perhaps most significantly, as Pankratz acknowledged in a followup interview, GPAC included in its numbers attendance at parks and libraries. Those numbers are substantial. The Carnegie Library of Pittsburgh, for instance, says it gets 2.9 million visitors a year, the vast majority of whom enter for free. That alone would account for about 12 percent of the “annual attendees” GPAC cites (and that doesn’t include non-CLP public libraries). And while some visitors to Allegheny County Parks pay for special programming, like yoga classes or golf, most of that system’s estimated 2.75 million annual visitors don’t pay, either (nor do visitors to other municipal parks in the region, from well-trafficked Schenley Park on down).

Pankratz, GPAC’s research and policy director, acknowledged that in counting parks and libraries, GPAC “erred on the side of inclusion,” and he agreed that the report could have been clearer on what was counted.

Still, all this means that free admissions at what are conventionally regarded as arts-and-culture attractions — plays, concerts, museum exhibits — are much lower than GPAC's 75 percent figure, and perhaps even closer to GPCA’s 34 percent count.

Regardless, a focus on free attendance tends to obscure the larger picture about the financial health of Pittsburgh’s arts scene. Mostly, the tone at the Feb. 26 presentation was upbeat.

For instance, take the Great Recession, which took as big a toll on the arts as it did on everyone else. But according to McInerney, even by 2012 the arts sector nationally had begun recovering from the crash. Revenue among the more than 5,500 groups surveyed — in towns from New York and Philadelphia to Los Angeles, Phoenix and the Bay Area — rose 7 percent, and attendance grew even during the recession itself.

Within the national picture, Pittsburgh fared reasonably well: Though we tied Cleveland for the smallest metro area in the survey, the percentage of arts groups here with operating deficits was no worse than the national average: roughly 40 percent, with half of those groups suffering deficits of more than 10 percent. (If the percentage of groups in the red sounds high, well, that’s the arts; few organizations are rolling in dough.) And earned income in Pittsburgh was 51.2 percent, just below average.

McInerney, noting Pittsburgh’s mix of small, medium and large groups across a wide range of disciplines (theater, music, dance, visual arts), praised the arts here as “a really rich and balanced sector.” He noted the local foundation community’s support for the arts — 15 percent of total revenue, among the highest in the country — and the fact that government spending per capita on arts in the region is higher than any city’s but New York. The big reason for this is the Allegheny Regional Asset District, which dedicates a portion of the county’s 1 percent sales tax to arts and culture.

Moreover, although earned revenue here (which includes ticket sales but also things like merchandising and facility rentals) was stagnant, total revenue rose by 7.5 percent, slightly above the national average. Reasons for that included a huge rise in giving by Pittsburgh’s board members and foundations – up by 77 percent and 35 percent, respectively — and a 17.6 percent rise in corporate giving.

Other dark spots on Pittsburgh arts’ CAT scan, meanwhile, included individual giving. It declined by 9.7 percent nationally, and in Pittsburgh by more than twice that, 20.5 percent. Individual giving declined in seven of the 10 cities CAC tracked in this category, in all cases by double-digit percentages.

But there’s a counter-trend: Nationally, gifts from board members and trustees were up by 20.3 percent, and foundation giving rose 9.2 percent.

True, increases in giving in some sectors might reflect a sampling bias: For instance, in 2009, the survey’s first year, giving was surely at a low point, because of the recession, and had nowhere to go but up as the economy recovered.

But the same was likely true of individual giving. And in a country where we hear more and more about income inequality, it’s hard to look at these post-recession numbers — big drops in individual contributions matched by big jumps in giving by board members and foundations and, at least in Pittsburgh, by corporations — and not perceive the effects of an economy where the rich keep getting richer and everyone else, at best, stagnates.

I posed this hypothesis to McInerney, who called it “interesting” but said there is more to the story. He cited changing patterns in individual arts giving, like the trend toward funding informal projects rather than organizations, and the rise of online crowdfunding. He also noted that during the recession, individuals and even foundations moved more toward funding social services and other social causes, and that some of them might not have resumed giving to the arts yet.

The takeaway, he says: “It’s definitely getting hard to raise contributed support in the arts.”

One additional bright spot for the Pittsburgh region, touted by both McInerney and Pankratz, was the Allegheny Regional Asset District. Funded by a sales tax, it provides millions to arts groups and museums (not to mention libraries, parks and sports-stadium debt). And that means that, to an unusual degree — moreso than any metro area that’s not the Twin Cities — Pittsburgh relies on taxpayer support for the arts. And that, too, is an argument that all those free admissions are not totally free.

Art Institute of Pittsburgh shutting down permanently in March