Josh Shapiro
This week has seen a slew of endorsements in the race for Pennsylvania Attorney General. But leading the pack is Montgomery County Commissioner Josh Shapiro, who was endorsed by a number of organizations and elected officials, from teachers to Philadelphia lawmakers.

On March 2, Shapiro received the endorsement of the Pennsylvania State Education Association which represents 180,000 public-school teachers, education-support professionals and retirees from 483 of Pennsylvania’s 501 school districts.

“From his time in the Pennsylvania House through his tenure as Montgomery County Commissioner, Josh has always stood with public-school employees and worked to strengthen our schools,” said PSEA President Jerry Oleksiak in a statement. “He is the best candidate to make our communities safe by investing in public education. Josh will be the people’s attorney, and stand up for the rights of all Pennsylvanians.”

The following day, he was backed by the Pennsylvania Association of Staff Nurses & Allied Professionals who have a membership of 7,000 nurses, technicians and other health professionals from Southeastern Pennsylvania hospitals.

“Josh has the integrity and experience to stand up to the powerful interests and make sure everyone gets equal protection under the law,” said PASNAP President Patricia Eakin in a statement. “From cracking down on polluters who undermine public health to ensuring workers can do their jobs in a safe environment, Josh will be the people’s attorney.”

“Northeastern Pennsylvania needs a fighter who will stand up to drugs and crime – but also to the telemarketers that prey on older Pennsylvanians, the deceptive businesses that fleece consumers, and the frackers that pollute our drinking water,” Shapiro said in a statement. “I’m deeply honored to receive support from these distinguished leaders in Northeastern Pennsylvania and I pledge that as Attorney General we’ll work together to fight for all the people of our Commonwealth.”

“I’m humbled that Philadelphia’s leaders are united behind this campaign to fight for all Pennsylvanians. We need an Attorney General who will lead the effort to reform our criminal-justice system, protect our constitutional right to clean air and pure water, and fight for seniors and consumers who are being taken advantage of by dishonest businesses,” said Shapiro. “I’m grateful to all of these leaders for standing with me, and I look forward to working together with each of them as Pennsylvania’s next Attorney General.” 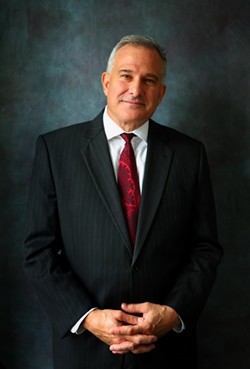 Stephen Zappala
Not to be outdone, Shapiro's opponent Allegheny County District Attorney Stephen Zappala also rang in the week with a number of endorsements.

Yesterday, Zappala was endorsed by the Philadelphia United Ward Leaders of Color, a group of African-American and Latino Philadelphia ward leaders, Democratic Party leaders and elected officials who represent Philadelphia in the state senate, state house of representatives and city government.

“Steve has a long record of protecting kids, improving communities and reforming our justice system,” said state Sen. Anthony Williams, one of the group's members in a statement. “For 18 years, he’s been taking illegal guns and drugs off the streets, improving communities by prosecuting absentee landlords that permit hazardous housing conditions, and using the latest forensic science to ensure police get arrests right the first time.”

On March 2, Zappala was endorsed by two firefighter unions: International Association of Firefighters Local 22, in Philadelphia, and the IAFF Local 1 in Pittsburgh. The two combined represent more than 6,000 active and retired firefighters.

"In Pittsburgh, not only are we well aware of the outstanding job Steve Zappala does as our District Attorney, as firefighters we are deeply grateful for his vigilance in pursuing and convicting arsonists and other criminals whose direct actions or acts of carelessness have cost the lives of men, women and children in our community and firefighters who answered the call to duty in dangerous and perilous circumstances. Endorsing Steve Zappala is not even a close call," said Ralph Sicuro, president of the Pittsburgh union in a statement.

“I’m humbled that my record and work as an effective and innovate prosecutor has earned the support of these distinguished elected officials from the Northeast,” said Zappala. “Today’s endorsements are significant to securing the Democratic nomination for AG. I’m truly appreciative.”

Zappala and Shapiro are set to face Northampton District Attorney John Morganelli in the April 26 primary. Last month, Pa. Attorney General Kathleen Kane announced she would not be running.