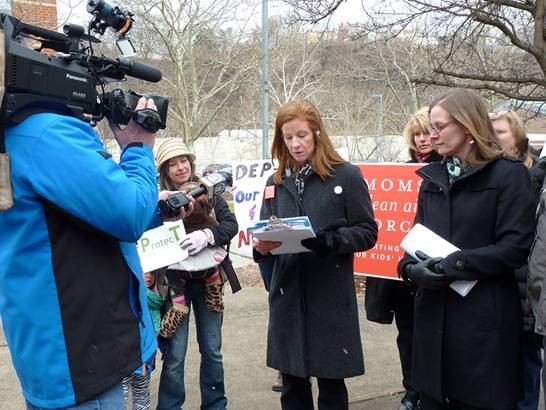 Photo by Ashley Murray
Patrice Tomcik of Moms Clean Air Force addresses the media about a new report that questions the proximity of fracking sites to schools and residences.
A study released late last month found that fracking well sites are too close to schools, residents and other hubs of human activity. Nearly 20 people, including the report's authors and members of the organization Moms Clean Air Force, addressed the media this week in front of the Pennsylvania Department of Environmental Protection's Pittsburgh office on Washington's Landing.

“Today’s publication supports what moms living in shale fields have known for a long time: Our children, who are a vulnerable population, are not adequately protected from the hazards of unconventional wells with the current setbacks,” said Patrice Tomcik, of Moms Clean Air Force. Last year, City Paper wrote about an hydraulic fracturing, or fracking, well pad being developed approximately a half-mile from her children's school — Mars Area School District, where about 3,700 children are enrolled.

The independent study, published in the journal Environmental Health Perspectives, reviewed geography, current setback regulations, air-pollution studies and other factors in the Marcellus (in Pennsylvania, Ohio, West Virginia and New York), Barnett (in Texas) and Niobrara (in parts of Colorado, Nebraska, Wyoming and Kansas) shale formations. Its authors included five public-health and medical professionals from the University of Pittsburgh, West Virginia University and Texas Tech University.

The study found that "presently utilized setbacks may leave the public vulnerable to explosions, radiant heat, toxic gas clouds and air pollution" and suggested that "a combination of reasonable setbacks with controls for other sources of pollution associated with the process will be required."

In Pennsylvania, the current setback, or buffer zone, for drilling near any building — a school or not — is 500 feet from the actual wellbore, or hole, not from the perimeter of activities.

The study did not suggest a specific setback distance, but said that more research is needed on human exposure to air pollution associated with fracking sites. 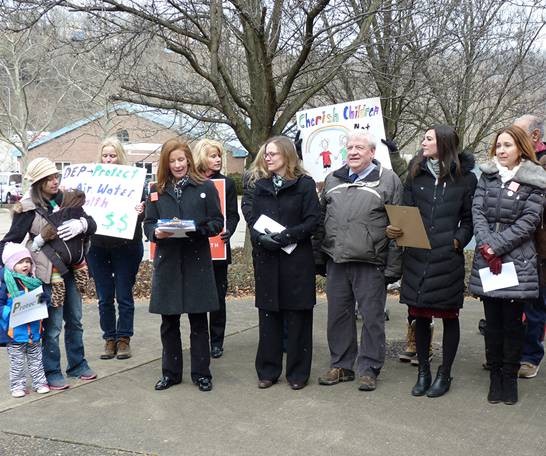 Photo by Ashley Murray
From left to right, Patrice Tomcik of Moms Clean Air Force, and report co-authors Marsha Haley of the University of Pittsburgh, and Michael McCawley of West Virginia University
“Setbacks are not a one size-fits-all protection for communities near unconventional well pad development. Both the features of the land and the weather patterns have to be considered because they may cause accumulation of air pollution,” said Michael McCawley, of West Virginia University and co-author of the study, in a press release. “Current setbacks may assume air pollutants are all produced only on the well pad, however, transportation of hazardous materials and diesel pollutants from vehicles related to well pad operations can occur at distances far away from the well pad.”

DEP spokesperson John Poister, who attended the press conference, said, "I'm going to forward this on to Harrisburg where our policies are made, and they'll review the report. And I'm sure they'll be very interested in what it has to say. There's a lot here. It's a rather intense document, so they'll take a look at it."

In October, a coalition of environmental activists and health-care groups called for a one-mile setback. The coalition issued its suggestion in conjunction with the release of a PennEnvironment report called "Dangerous and Close," which drew attention to hundreds of schools and child-care facilities within one mile of permitted fracking sites.

In response to the October PennEnvironment report, a spokesperson for the Marcellus Shale Coalition, the group representing the state’s oil and gas industry, called it the “latest attempt ... to spread fear and misinformation about safe and tightly-regulated shale development.”

Marcellus Shale Coalition spokesperson Erica Clayton Wright responded to the most recent study in a written statement. "Compared with other energy-producing states, Pennsylvania’s setback requirements are among the nation’s most stringent,” Wright wrote in an email to City Paper.

Editor's Note: This post was updated to include comments from the Marcellus Shale Coalition.