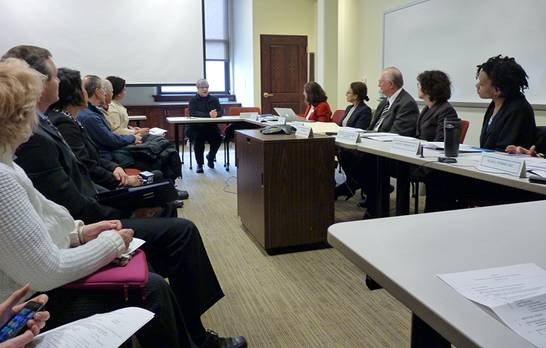 Photo by Ashley Murray
Lawrenceville resident JoAnne Buchanan testified to the Allegheny County Board of Health about the steel foundry in her neighborhood.
Lawrenceville residents and environmental activists delivered a petition with nearly 1,000 signatures to Wednesday's meeting of the Allegheny County Board of Health, demanding the Health Department tighten regulations on a steel foundry in the neighborhood.

The McConway & Torley steel foundry, which manufactures a significant portion of the U.S. railway industry's rail-car couplers, sits at the end of 48th Street, near the Allegheny River. A health-department monitor along the facility's perimeter collects data for its Lawrenceville Toxic Metals Study, which measures levels of chromium, manganese and lead coming from the foundry. Last year, air-quality watchdog Group Against Smog and Pollution received complaints about odor from residents who lived near M&T.

"I don’t want to have to move but I have COPD, asthma, and I am a survivor of lung cancer," JoAnne Buchanan, a Lawrenceville resident, said at yesterday's meeting. Buchanan said she didn't know the foundry was there when she moved to Hatfield Street seven years ago. "This is the worst place I could possibly live."

Last year, the health department reviewed operations at the McConway & Torley — which is owned by Dallas -based Trinity Industries — and drafted a permit that would cut the foundry's production limit by more than half. The company responded last year at a public hearing last spring by expressing concern for the loss of jobs at the foundry, which employs about 400 workers.

In the interim, environmental-advocacy groups and residents have been canvassing Lawrenceville.

Maggie Brooks, a Lawrenceville resident and canvasser for Clean Water Action, said she "talked to longtime residents who were exasperated and new residents who didn't even know [McConway &Torley] was there." She presented the board with the petition.

"M&T places the health burden on all residents," Brooks said. "We need a permit that protects our health."

According to the report, which says that nearly 150,000 people live within three miles of the foundry, "At least six times between April 2011 and June 2015, the fenceline monitor showed manganese levels exceeding the U.S. EPA’s safe amounts for long-term community exposure."

“Considering McConway & Torley’s location in such a densely populated neighborhood of Pittsburgh, we support these efforts to reduce toxic emissions,” said Stephen Riccardi, of PennEnvironment, in a press release issued after the meeting. “We’re counting on the Health Department to issue these rigorous standards and protect public health.”
Yesterday, the health department's Air Quality Program Chief Jamie Graham said the second round of testing should begin "hopefully late spring."