It’s Super Tuesday! While it's eight weeks until Pennsylvanians cast their primary votes, today could determine who we will be voting for in terms of the presidential election. 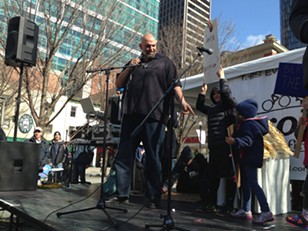 Photo by Ryan Deto
John Fetterman speaks to the Market Square crowd with support from his children.
While Republican presidential candidate and real-estate mogul Donald Trump is sure to dominate the headlines, today could determine if Democratic presidential candidate and Vermont Sen. Bernie Sanders will still be on the Pennsylvania ballot come April 26. If Sanders is soundly defeated by former U.S. Secretary of State Hillary Clinton in the 12 states casting Democratic ballots today, it may be close to mathematically impossible for him to win the nomination.

This weekend, a large number of Pittsburghers showed their support for Sanders, hoping to cast their votes for the self-described “Democratic socialist.”

Around 750 people participated in a march from Oakland to Downtown in support of Sanders. They chanted his official slogan (“Feel the Bern”) and “Black Lives Matter.” Also chanted: “banks got bailed out, we got sold out,” in reference to the government bailout of big banks after the 2008 financial crisis, compared to the collective $1.3 trillion student debt, from which some politicians say the government is making a profit.

Braddock Mayor and Pennsylvania Democratic U.S. Senate candidate John Fetterman took advantage of the Sanders enthusiasm and spoke to the large crowd of mostly young people who had gathered in Market Square. Fetterman publicly endorsed Sanders in January and told the crowd he was the only U.S. Senate candidate who had done so. (It's a claim that is not quite true: Tom Fiegen has indicated he will run for U.S Senate in Iowa and has endorsed also Sanders, according to PolitiFact.)

Fetterman told the crowd his views aligned with Sanders, especially concerning inequality, which he said is “not just one issue, but every issue.” He also said he would work to end the war on drugs; address issues associated with mass incarceration; support the legalization of marijuana; and fight to repeal Citizens United, the U.S. Supreme Court case affecting political-campaign funding. Fetterman differs slightly from Sanders on fracking however. Fetterman is calling for a moratorium on Pennsylvania fracking until environmental regulations and a severance tax are implemented, while Sanders is calling for a nationwide ban.

Photo by Ryan Deto
Pittsburghers march down Fifth Avenue in Uptown in support of Bernie Sanders.
“See, this is what the grassroots looks like, this is not going away,” said Fetterman after the rally.

A dozen people lined up to take selfies with the Braddock mayor, but he may have an uphill climb to the Democratic nomination. Among the crowd were about 15 people donning Fetterman campaign swag. One supporter said he is supporting Fetterman because he believes he will ensure a better future for his children, but another woman wearing a Fetterman shirt said she was wearing it because “someone gave it to me.”

According to the latest polling from Franklin and Marshall College, Fetterman is polling at 8 percent and is trailing his Democratic opponents, former U.S. Congressman Joe Sestak (21 percent) and former Pa. DEP secretary Katie McGinty (12 percent). Most Pennsylvanians remain undecided (56 percent), according the the poll.

However, Fetterman’s numbers are increasing at the fastest rate of any candidate, and yesterday he picked up an endorsement from Maryland governor and former presidential candidate Martin O’Malley.