The walk from Penn Avenue in Garfield to the top of hill and Garfield Commons Apartments is a doozy. For every 10 feet you walk, you gain a foot of elevation. That's one-and-a-half times as steep at the Bates Street hill from Second Avenue to Boulevard of the Allies in South Oakland, and twice as steep as the Penn Avenue hill from Doughboy Square in Lawrenceville to Bloomfield. And on the weekends, Garfield residents without cars have no choice but to walk it.

Transit-advocacy group Pittsburghers for Public Transit (PPT) has been requesting Port Authority for months to reinstate weekend bus service for route 89, the route that serves the hills of Garfield. Recently it got help from some public officials. 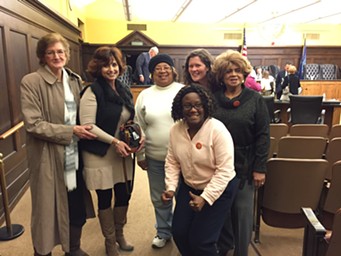 “You can see why this area definitely needs a means of transportation,” said Ranalli-Russell during the meeting. “To restore this bus service would make life a little easier for Garfield residents.”

The top of Garfield hill is home to two Pittsburgh Housing Authority complexes for low-income residents, including one specifically for senior citizens. Ranalli-Russell said she wanted to advocate for Garfield residents because she did not have someone advocating for her while raising her children as a single mother.

The motion was unanimously supported by the 15 members of council, especially Councilor James Ellenbogen, of Banksville, a Garfield native who walked up and down the hill during his four years attending Peabody High School (now Obama Academy) in East Liberty.

Molly Nichols of PPT says that about 400 people have submitted requests for weekend service on the 89, and she thanks Ranalli-Russell for sponsoring the motion.

“Residents in Garfield have been tirelessly advocating for this service to be reinstated,” wrote Nichols in an email to City Paper, “and they appreciate getting this show of support from their elected officials. The support gets us closer to ensuring that all communities get the transit service they need.”

Nichols, who spoke at the council meeting, asked the council to also use the occasion to consider new funds that could bolster the Port Authority budget, including requesting funds from corporations. Currently the county contributes a 15 percent match of state funds toward Port Authority’s budget, but public-transit entities are allowed to receive funds from organizations, corporations and municipalities under the transportation bill, Act 89, passed in 2013. (A micro-transit agency in Robinson receives funds from businesses and nearby towns.)

PAT spokesperson Jim Ritchie said in November 2015 that service suggestions will be evaluated by the PAT board through an equity-score process, which CP wrote about here. The board will release its annual service report in May, according to Ritchie.

In other PAT news, a major rail-replacement project for the light-rail line in Beechview has been altered to accommodate more residential parking on Broadway Avenue and limit the burden on local businesses, according to a PAT press release. The change occurred thanks to broad community input and recommendations from public officials, including Pittsburgh City Councilor Natalia Rudiak and county Councilor Ellenbogen.

“We heard loud and clear from the community and its elected leaders about the desire to address these key concerns in our work plan,” said PAT CEO Ellen McLean in a press release. “This change ensures there will be more on-street parking options for residents and less impact on businesses.”

Originally, construction was set to occur along the entire stretch of Broadway Avenue, but work will now be broken up into smaller areas; only sections that are being worked on will lose parking. Also, construction in the business area is expected to be “consolidated” and completed within three months. Work is scheduled to start on March 27 and will continue for six months, with crews working Monday through Saturday from 6 a.m. to 11 p.m.