It’s no secret that last year was a bad year for the Allegheny County Jail. Two deaths in one day in May (the culmination of 11 deaths over less than two years) led Allegheny County Chief Executive Rich Fitzgerald to announce the county would not be renewing the contract of Corizon, the jail’s for-profit health-care provider. 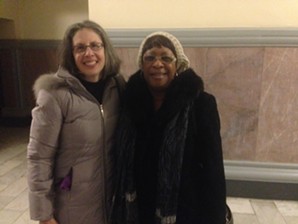 Photo by Ryan Deto
Terri Klein, left, and Earlene Coleman
These deaths also caught the attention of another then-county government member, former county councilor Terri Klein, who represented District 11. Klein began to participate in jail-related activities while serving on council, including speaking at a public forum regarding health care at the jail.

Klein, who did not run for re-election last fall, has now been nominated by Fitzgerald to serve on the county’s Jail Oversight Board and was positively recommended by the appointment committee on Feb. 10.

“I am very interested in the health department within the jail and making sure there is timely care given to inmates,” says Klein.

Klein, who holds a degree in public health and works as a physical therapist, says she has a special interest in women’s health and would bring that to the board. She also said she would like to see the jail focus more attention on diversionary programs implemented at the jail, so non-violent offenders don’t necessarily have to serve their terms inside jail walls.

She adds that she is pleased to see Allegheny Health Network (which provided physicians to the county jail under the new agreement) has increased visit frequency compared to Corizon.

Advocacy group Allegheny County Jail Health Justice Project relaunched their efforts last month and continues to call for the firing of warden Orlando Harper. Julian Johnson, of the Justice Project, also questioned in January why the jail has not installed an electronic medical-record system, something that Corizon failed to implement.

Also nominated to serve on the Jail Oversight Board, and positively recommended by the appointment committee, is Rev. Earlene Coleman, of Bethlehem Baptist Church in McKeesport.

Coleman says she became interested in goings-on at the jail after being asked to give a speech for a jail GED graduation ceremony. She says this made her passionate about recidivism, something she wants to focus on if appointed.

“I would like to look at the process of rebuilding inmates to go out successfully into society, not come back to the jail,” says Coleman.

County council will vote on the approval of Klein and Coleman at the Feb. 16 council meeting at 5 p.m. in the Gold Room of the Allegheny County Courthouse.

The county’s Jail Oversight Board meets the first Thursday of every month at 4 p.m. in Conference Room 1 of the county courthouse. Meetings are open to the public.