Today is Charles Darwin's 207th birthday, and while there aren't any birthday bashes happening in Pittsburgh today, it's worth noting that local scientists have developed an app that facilitates a conversation with a "synthetic" Darwin.

"The fundamental principles of evolution are the way biology works, and a lot of people, particularly in the U.S., have a misunderstanding about evolution," says John Pollock, a biology professor at Duquesne University who came up with the idea for the app. "It's sad that some people believe there's another side to this; but evolution is like gravity, it is part of our universe." 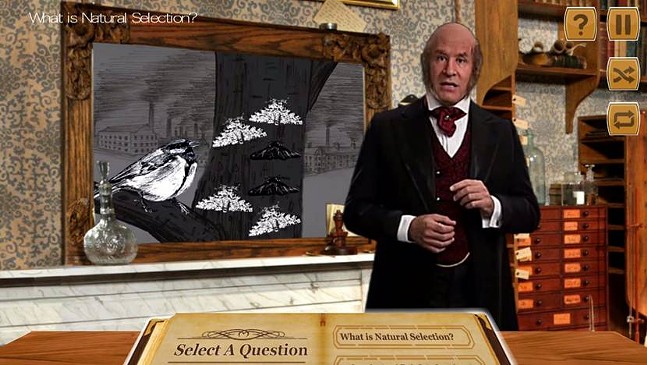 Darwin Synthetic Interview app allows users to ask questions about Charles Darwin on their mobile devices.
"We referenced everything from Darwin's writings and letters," Pollock says. However, there were a lot of things that Darwin didn't know about during his life but that his research applies to today.

"If you ask our Darwin about genetics, he says he doesn't know," says Pollock. There are also a lot of social science and theological questions that users may want to ask of Darwin as well, says Pollock.

To fill the gaps, users can ask modern experts — from American Civil Liberties Union lawyer Witold Walczak to the Vatican's chief scientist —  about how the foundations of Darwin's research applies to various aspects of life today.

"That lets it fit into a very broad audience," Pollock says.

The Darwin Synthetic Interview was created as an interactive educational tool, on exhibit at the Carnegie Science Center, in 2009 by Pollock and his team, along with Carnegie Mellon University's Entertainment Technology Center, with funding from the National Institutes of Health Science Education Partnership Awards. The local company Simcoach Games adapted it into an app late last year.

Though the full app is $9.99, a free "lite" version includes 24 of the most popular questions asked of Darwin.