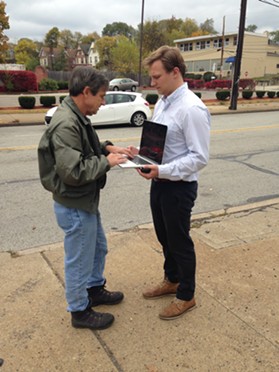 Photo by Ryan Deto
U.S. Senate candidate Joe Sestak answering emails on the go at a Pittsburgh campaign stop in October.
Since last week’s forum at Carnegie Mellon University, the three major Democratic U.S. Senate candidates have been busier than usual. Each hit the campaign trail the day after their debate, which introduced to them to several hundreds of southwestern Pennsylvania residents who attended. The forum was polite, with candidates avoiding attacking each other and agreeing on many policies. (To read City Paper’s coverage of their in-depth views on how to solve the affordable housing crisis, click here.)

But since leaving the forum, Braddock mayor John Fetterman, former gubernatorial chief of staff Katie McGinty and retired Navy Admiral and former U.S. Representative Joe Sestak have all settled back into their typical campaign strategies.

Fetterman, who has appeared on late-night talk shows that cater to a younger demographic, continued this game plan by hosting a public online forum on Reddit, a social-networking site. Users asked questions and Fetterman posted responses on the site's board. (This is typically called a "ask me anything" or AMA forum.) He answered questions on a variety of topics, including fracking, criminal justice, presidential candidate Bernie Sanders and pay inequality. (Here is a link to Reddit forum.) Immediately after the forum, he visited Penn State University, in State College, to talk to students.

McGinty’s campaign continued in its usual manner as well. She picked up the endorsement of the Service Employees International Union yesterday, as well as a slew of endorsements over the last week from Erie County elected officials and the League of Conservation Voters Action Fund. So far, McGinty has garnered the most endorsements, including big names like Gov. Tom Wolf and Pittsburgh Mayor Bill Peduto. McGinty also released a digital advertisement yesterday, which states she will fight for “families struggling to get ahead.”

And Sestak also settled back into his typical routine. After the forum, he attended many small events, beginning in Pittsburgh at Big Jim's restaurant in Greenfield. Then it was to the Philadelphia area, which included discussions with small Democratic committees in Bucks and Chester county townships, according to Sestak's campaign spokesperson David Waterman. Topics discussed at the meetings included national security, enhancing research for autism and college affordability. His "Walk In Your Shoes" campaign has found Sestak walking more than 400 miles across the state; these usual include small, intimate meetings with constituents and local organizations. Sestak also received endorsements from the Democratic committees of Delaware County, his home county, and Chester County, which is McGinty’s home county.

A conversation with Taylor Guarisco of Givers