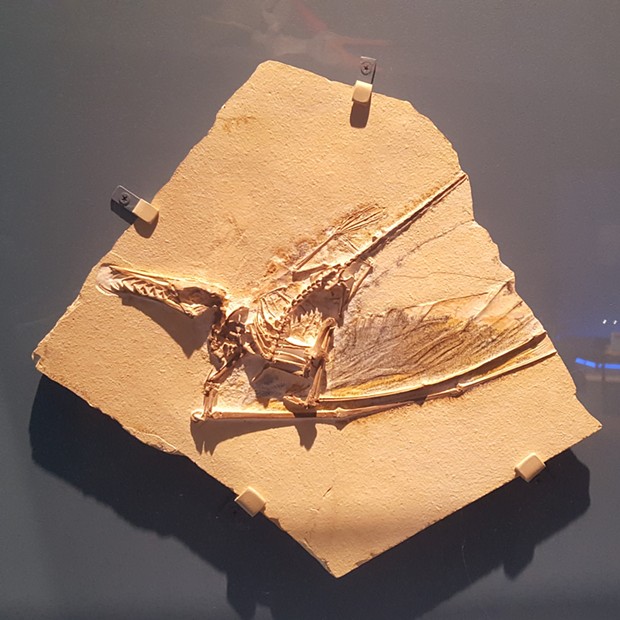 Photo by Courtney Linder
The world-famous Pterosaur fossil "Dark Wing" contains one of the best-preserved wing membranes in the world.


The Carnegie Museum of Natural History will unveil its newest exhibit "Pterosaurs: Flight in the Age of Dinosaurs" tomorrow at noon.

The exhibit boasts original fossils, casts and models of the prehistoric Pterosaur — the first animal with a backbone to fly under its own power. Often mislabeled "Pterodactyls," which are just one subcategory of the winged beasts, Pterosaurs have been extinct for over 66 million years.

The highlights of the display include a skull cast of Tropegnathus — the largest open-ocean dwelling Pterosaur — and "Dark Wing," a world-famous Pterosaur fossil with wing membranes that are intact.

Dark Wing is a specimen that was discovered in Germany in 2001. The fossil contains the best preserved Pterosaur wing membrane in the world, complete with detailed blood vessels and muscles. This is the first time Dark Wing has been on display outside of Germany.

In addition, there are interactive displays on Pterosaur flight and an overhead life-size model of Quetzalcoatlus northropi, the largest flying animal known to man.

Quetzalcoatlus has a beak large enough to swallow a small human and a wingspan equivalent to an airplane's wings.

"In its ecology, it's like a stork from hell," explains Habib. "It definitely had the ability to eat small dinosaurs."

That being said, don't confuse Pterosaurs for birds or dinosaurs — they have no close relatives, though they're most comparable to birds or crocodiles.

"Pterosaurs: Flight in the Age of Dinosaurs" continues through May 22.

The Carnegie Museum of Natural History is located at 4400 Forbes Ave. in Oakland.