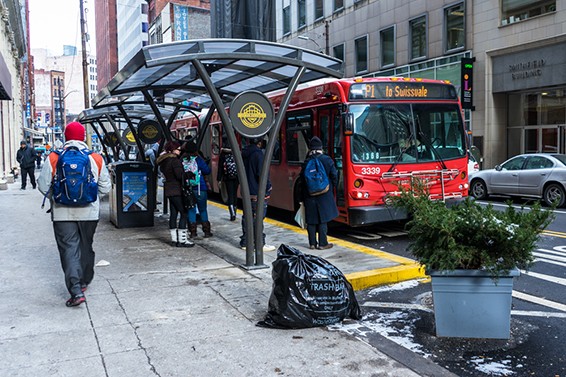 If you spend any time near Downtown Pittsburgh’s Sixth Avenue and Smithfield Street corner, you’ve probably noticed the sidewalk extension installed earlier this year. What that’s all about was revealed this week, as Envision Downtown — with support from the Colcom Foundation — transformed it from a narrow sidewalk stop to a wider, sheltered stop. We couldn’t be happier.

Every weekday, 6,500 people access Downtown via this corner. Like everyone else, they’re going to work, to school, to shop, to appointments. In other words, living their lives, spending money and making Downtown more vibrant. They’re spending their money wisely by leaving their cars at home, or not even owning a car, and they deserve something better than a sign on a stick.

Improving transit’s visibility also improves Downtown's quality of life — and, thereby business viability. The new "super stop" could help improve pedestrian access through the area and to nearby businesses. The design itself is also not only an accessibility improvement — it’s an image improvement. Investing in transit increases ridership and its attractiveness; unsnarls Pittsburgh streets; and improves the health and wealth of everyone — even if you don’t use it.

Most importantly for our neighborhoods, this sets in motion a change in thinking that we’ve been pushing for some time: improving transit’s viability and accessibility is not just the Port Authority’s responsibility. We all own it, and we all must step up. The streets, sidewalks, intersections and traffic signals influence transit’s attractiveness at least as much as how Port Authority puts buses on those streets. Mayor Peduto showed strong leadership by owning that responsibility and doing something about perhaps the most overlooked part of the trip —  waiting for the bus. Pittsburghers for Public Transit, agree, saying, “[We] are thrilled about this new and improved bus stop. We commend Mayor Peduto, Envision Downtown, and everyone who helped to implement this 'super stop.' We look forward to more opportunities to improve the transit riding experience.”

If Pittsburgh is to continue to attract new talent; realize its carbon-reduction and community-revitalization goals; and keep itself affordable for its most vulnerable residents, more "super stop"-like projects are needed Downtown and in our neighborhoods. This new way of thinking must become institutionalized. Our neighborhoods were transit-oriented before it was chic, and their rebirths are as linked to making transit, walking and biking safer and more appealing as any bricks-and-mortar redevelopment strategy. PCRG and its members are doing our part, advancing projects with similar transit-accessibility-improvement philosophies. We are also advocating for policy changes so that such future infrastructure projects simply become how we do business. We thank Mayor Peduto for his leadership and look forward to working with his administration, and all stakeholders, to make the Smithfield "super stop" the first of many transit street projects and a new way of thinking.