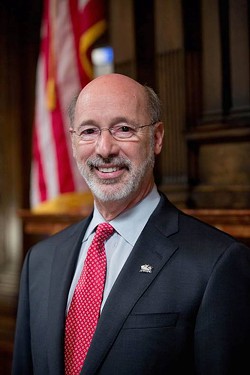 The governor has invited people to write their questions on his Facebook page, and as of right now, 205 people have done so. Wolf will begin answering "as many as [he] can" via a live video stream at 3:15 p.m. The meeting is planned to last for 45 minutes, according the governor's press office. The majority of the questions are about the oil and gas industry and the practice of hydraulic fracturing, or fracking.

According to media reports, Wolf is expected to make an announcement today on regulating methane emissions from the oil and gas industry.

Neil Shader, press secretary for the state's Department of Environmental Protection, would not elaborate on the announcement but told City Paper via phone that additional information would be available tomorrow via a press webinar.

The DEP is now finalizing new regulations for the oil and gas industry. (Read CP's Green Light column this week for more details.)

On the federal level, the Environmental Protection Agency has announced new rules on methane emissions.  According to the EPA's website, methane is the "second most prevalent greenhouse gas emitted in the United States from human activities."